MakerBot Digitizer Gets Some Competition With Sub-$200 Rubicon 3D Scanner

When the MakerBot Digitizer was announced a few weeks ago, it was considered a milestone for bringing 3D scanning to the masses. Could it be that a better and cheaper 3D scanner will be entering the market before Christmas as well? The Rubicon 3D Scanner is the Indiegogo project launched yesterday that aims to lop an entire $1200 off of the 3D scanning entry fee presented by MakerBot. At $200, is it too good to be true? Let’s take a look. 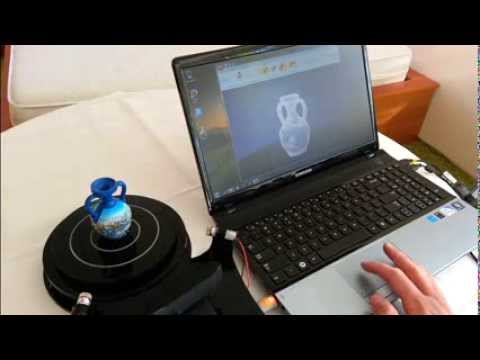 Robert Mikelson of Riga, Latvia has essentially developed an Arduino-controlled, webcam-based 3D scanner. Similar to the MakerBot Digitizer, the scanner uses two lasers and a stepper motor to control the turntable—yet with the ability to input your own webcam, the user has the ability to balloon the camera resolution based on whatever webcam they choose. In the case of a Logitech C920 for example, that could be 15 MP versus the MakerBot Digitizer’s 1.3 MP.

Using the integrated webcam of your choice, the scanner takes a picture of the desired object with the lasers both on and off, then reads differences in the photos to detect the final shape. This process repeats for 800 steps as the turntable turns in increments of .45 degrees until the entire object has performed a 360 degree rotation.

Once complete, a user can use the data just like any other high polygon mesh for cleaning up, referencing, or 3D printing. Still don’t believe that you can get all this for under $200? Take a look at the sample scans provided by Robert:

For $199, Robert is offering a fully-assembled Rubicon 3D Scanner in a custom color (bright orange to match your collection of traffic cones?) with a total fundraising goal of $25,000 (for the record, that’s just 125 of these bad boys that he has to sell). The money will be used to create his own printed circuit boards and the scanner will be ready for shipment by the second half of December.

For more info, head over to the Rubicon Indiegogo page.