It isn’t the Fourth of July anymore, but that doesn’t mean you can’t indulge in a little explosive mayhem! Everyone loves fireworks (except for, you know, the ones who’ve been injured by them), and making them smaller for the sake of portability is the best way to enjoy them any day. 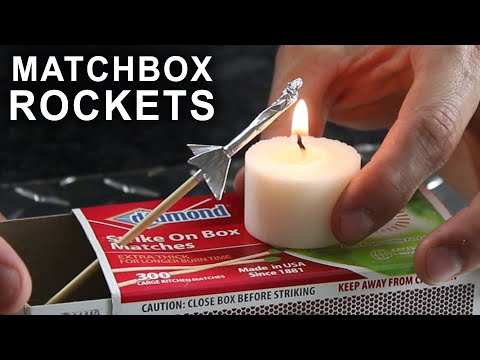 Inspired by a video he saw about a year ago, Grant Thompson of The King of Random made his own method for creating a matchbox rocket kit. All you need are some cut-up matchstick heads, a barbecue skewer, aluminum foil, aluminum tape, and a pre-made template Grant was kind enough to post online.

You can’t have a light show without rockets, so take a bunch of those matchstick heads and store them in a container for later use.

Meanwhile, you’ll want to print out Grant’s template and cut it out on a piece of cardboard. With this, you’ll be able to cut your barbecue skewer down to size, create squares out of aluminum tape for the rocket fins, and trace the template on the aluminum foil to make multiple rocket bodies.

You’ll also need to make a couple of fins and bodies and store them away for later. Everything you need can then be stored perfectly inside your large matchbox. This also serves as a launch pad and assembly station.

Now that you have everything you need in your matchbox, it’s time to make some rockets!

Using the template as a guide, take a matchstick head and place it on top of the barbecue skewer. Tightly roll it in a rocket body using the skewer while leaving enough space above the matchstick head so you can crimp the foil down with a pair of pliers.

To make the rockets look like actual rockets (and more importantly, give them some balance), slide the aluminum tape fins through the body and stick them right at the bottom of the rocket. Congratulations! You just made your first matchstick rocket! Now go make ten more then we’ll really have a party!

Puncturing a hole at the top of your matchbox assembly kit allows you to position the rocket and adjust the angle at which you plan to launch it. Just light a fire under the tip of the rocket and wait until the foil gets hot enough to ignite the matchstick head.

These rockets may be easy to make, but they’re no slouch in terms of blasting off. They can fly pretty far and according to Grant, some can reach distances of up to 40 feet away.

If you want to find more projects you can easily recreate in the confines of your home, definitely check out Grant and the rest of the team at The King of Random.