Folks who have watched Toy Story 2 before will remember that one scene where toy cowboy protagonist Woody gets his arm ripped off. It’s a cathartic moment watching his arm being repaired in the movie. Besides his arms getting fixed, watching the character receive the full restoration he deserves gives us absolute satisfaction.

Sadly, the official, real-life versions of Woody are a far cry from what we see on the screen. Apart from not coming to life when owners aren’t around, the Woodys you find in toy stores just don’t conform to movie standards. To be specific: aesthetically. 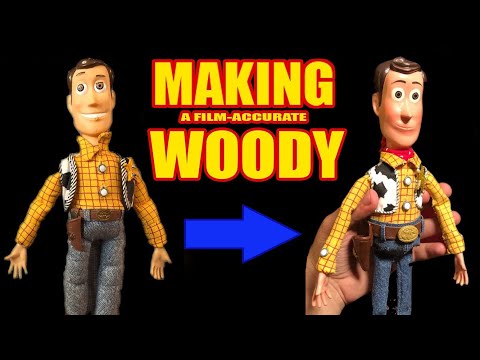 Eager to make his own movie-accurate Woody doll, Duane of Duane Made It took a bunch of garage sale Woody dolls and repurposed their parts for his special project. He split the creation process into 5 parts but for the sake of giving an overview, here’s how he made some of the Pixar cowboy’s iconic features:

Official Woody torsos are either too thin or too small, so Duane made a custom piece using the top and bottom joints of a garage sale Woody and an old pillbox. He used plumber’s epoxy to glue the pieces together and added some hinges to make it easier to reach the voice box inside.

Thanks to the Internet, finding clean footage of Woody’s voice lines from the movie isn’t that hard. Duane had trouble finding one particular line, though. However, instead of scouring the darkest corners of the Net, he recorded his own Woody impression and compressed it to fit the programmable voice box.

Connect that voice box to a battery pack and Woody’s iconic pull string and you have yourself a talking cowboy!

The Arms and Legs

Everyone knows Woody as that lanky cowboy with too much joint movement. To mimic this, Duane used cut glue sticks to fill out Woody’s arms and legs.

Woody’s shirt is repurposed from an older Woody model, but Duane thinned down the sleeves to give them that movie-like look.

The pants, on the other hand, are made from real denim jeans and sewn specifically for this Woody model alone.

Molding Woody’s head seems to be the toughest part, considering how hard it is to bring life to a literal plastic face.

Duane employed a mix of sanding, plumber’s epoxy, and epoxy putty so he could sculpt over an old Woody head. He added layers to the cheeks, eyebrows, and mouth to make them pop, as well as a bunch of details to Woody’s hair using sculpting tools.

Being satisfied with the sculptured face, Duane sanded it down and applied acrylic paint in five layers. After applying two spray paint layers as a primer, he was finally able to paint Woody’s head.

Woody can’t ride like the wind on his trusty steed Bullseye without a hat, so Duane bought an old Woody hat online and cut it down to the perfect size. He then hand-stitched some fishing line through the sides to make the ridges of the hat look more authentic.

Other parts of Woody, such as the boots, belt buckle, and gun holster were made using plaster of Paris molds. Duane then used polymer clay to sculpt the buckle and holster, while the big boots were sculpted using plumber’s epoxy.

As for Woody’s iconic vest and bandanna, Duane hand-painted both pieces before donning them on his custom-made cowboy.

Unlike the store bought counterparts, Duane’s Woody version definitely has a hand-crafted feel to it. All five parts of Duane’s project are worth watching, especially if you’re a sucker for custom toy designs.