With over a million views on his primitive technology-related videos, the YouTuber appropriately known only as Primitive Technology has indeed found the recipe for viral success.

While primitive technology and streaming video might go together as well as oil and water, a recent surge of views in survivalist-related content – particularly those that document primitive craftsman processes – have proven that old world processes can hold their own in the age of Vine and mobile video.

“What I love about (these videos) is that it shows ancient people were not “primitive” in the sense of stupid,” says Marialla, a YouTube user. “They were extremely intelligent and made the best use of what was available to them at the time. People speak of cavemen as if they were different from us, but 10,000 years is not even a blink of an evolutionary eye. They were exactly the same as us.”

More recently, Primitive Technology took to making what is perhaps one of his most fascinating devices yet – a handmade cord drill that he then upgraded to a pump drill.

“A cord drill is a spindle with a fly wheel attached, so it looks like a spinning top,” he explains. “The middle of a piece of cord is then put into a notch at the top of the spindle. The ends of the cord are then wrapped around the spindle and then pulled quickly outwards causing the drill to spin. The momentum of the fly wheel causes the cord to wrap back around the spindle in the other direction. When it stops, the cords are pulled outwards again, and the drill spins in the other direction.” 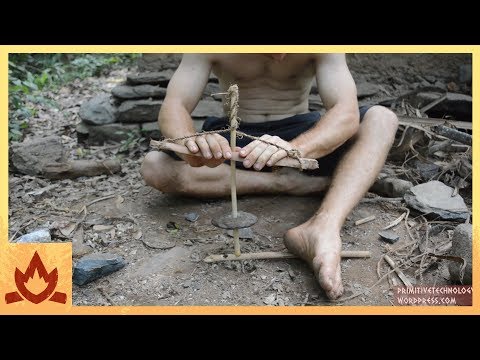 Needless to say, if you ever expect to crash land on an island, make sure that this guy is flying with you.

Cabot 1911 Pistol Is Made From a Meteorite, Is World's Most Expensive Ever