There’s just something about restoration projects that really fascinates me. It might be the joy of seeing the years of wear and tear being removed from something old. It could even be the intricate process of restoration. Or, perhaps, it’s just that I see the sentimental value in every single stuff. No matter what the reason is, it’s always nice to see something get a second chance at life.

Forgotten Shine Restoration is a relatively new YouTube channel dedicated to restoring old things to their natural splendor. This often involves a lot of rust removal, sanding, and, on occasion, making a couple of improvements to very old designs. 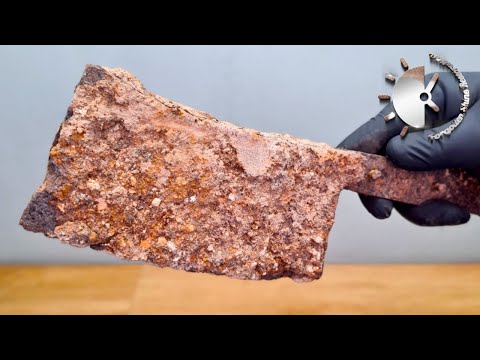 Just take a look at how they restored an old cleaver found in a flea market. The video is best watched for yourself as it includes a lot of satisfying visual and audio ASMR, but I would like to point out a couple of clever tricks they used to bring this cleaver back into the kitchen.

You’ve seen people use rust remover to chip off years of the flaky orange stuff, but not everyone knows you can use electrolysis to achieve similar results.

By attaching a couple of electrical wires to the cleaver and dipping it in a sodium hydrogen carbonate solution, they were able to create an environment around it where the majority of the rust-removal process would occur. Drop some metal rods to run a current through it and what do you get after 16 hours of waiting? Layers of rust that can be easily scraped off.

Grinding and Shaping the Sides

While not an obscure trick, grinding the jagged edges of the cleaver made it look cleaner and allowed it to be sanded and sharpened more easily. This also brought back some of the shapes the cleaver lost over the years due to rust and corrosion.

Using the belt grinder also removed all of the pitted corrosion on the side of the cleaver; returning its shine and reflectiveness.

You would normally use a grindstone to sharpen your knives, but did you know that knife sharpening jigs exist? Because I sure didn’t!

This handy tool lets you sharpen your knives at just the right angle. For this project, the cleaver was attached to the end of the knife sharpening jig and run along a length of sandpaper at 30°. This restored the cleaver’s fine cutting edge. The process also made it easier to sharpen the cleaver using a grindstone afterward.

Want to give your metals that cool, blackened look? Dunk them in some iron III chloride!

After giving it time to stick to the metal (around 5 minutes), they removed the cleaver and scrubbed it underwater with some steel wool. They repeated this four more times until the metal was nice and dark.

To cap it all off, they dunked the blackened cleaver in some instant coffee and left it for a day. This made the cleaver look even darker and grittier (I’m sure it smelled like a café for a while!) To make it shine and maybe remove some of the smell, they slathered the metal in cooking oil.

The blackened cleaver is paired with an ebony handle which, thanks to the mixture of wood glue and ebony wood dust, looks fantastic. It may not be the exact same cleaver it was years ago, but it definitely looks better and cuts now with a sharp edge!