You know Eric Strebel likes to show you how to make stuff, right? Did you also know he’s a science fiction fan. Upon watching a movie involving a magical, glowing amulet (which narrows the potential number of films down to about a thousand), he felt inspired to create his own wearable glowing rock – one which has a pulsing “heartbeat” of its own. 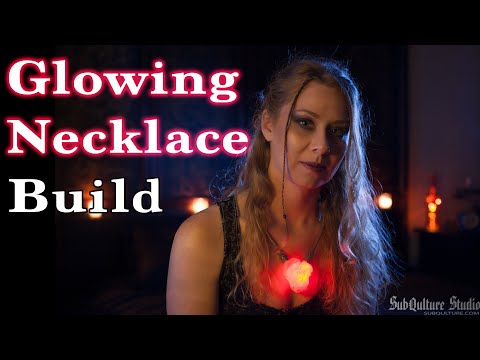 As with all his designs, Strebel starts off by sketching his ideas onto paper. Once he has the initial design figured out, he sets out to find a suitable stone for the amulet. The gem had to be big enough to house a simple circuit system, yet small enough so it wouldn’t weigh down the amulet wearer.

After finding one that’s just the right size, he takes it home and crafts a mounting for the gem. He carves a rough outline on Masonite to see how the whole thing will fit together.

Once finished, he creates a frame by pressing polyester between the Masonite and the gem–This is what connects the batteries, circuits, necklace chord, and gem together. With some filling and drilling, the frame is ready to hold the battery pack in place.

To give the amulet a steampunk feel, Strebel adds threaded screw studs onto the mount which connects the amulet to the braided cable chord. He also drills out extra mounting holes which allow the mount to connect to the stone he just bought. He then finishes the base by spraying it with primer to ready it for casting.

It wouldn’t be an Eric Strebel design without resin casting, so he casts both the base of the amulet and the battery pack in a flexible resin to make it feel less like the wearer is lugging a large rock around their neck. A number of parts were cast before Strebel finally decided on a base with an earthy color to compliment the amulet.

With the housing finished, he starts working on the amulet’s circuitry. Using a prototype circuit as a basis for the pulsing amulet, he solders a city made of circuitry which fits inside the wearable rock. He creates the glowing centerpiece by connecting the circuits to the battery pack.

But it isn’t over yet; Strebel still has to craft the necklace which holds the amulet. He modifies some hose ends and a quick release airbrush connector by removing some of their extra bulk to make them more suitable for jewelry parts. These parts then connect to a length of braided cable which serves as the bulk of the necklace.

Now it’s time to connect everything together. He attaches the contacts which connect the battery pack to the circuit to give it a power source. By snaking the wires through the amulet, it looks like Strebel just gave life to an inanimate object.

He connects the completed amulet to the braided cable necklace to finish things off. Note that the electrical components don’t go through the necklace itself but remain inside the amulet.

Nice, eh? You can find more of Eric Strebel’s designs over on his YouTube channel.