Back in the 18th century, travelers on the American frontier had to constantly move to get stuff done. Whether it’s to trade, settle, or explore, chances are you’d need a gun to feed and protect yourself. Be it a musket or a pistol, guns back in the day used circular bullets mixed with gunpowder to get the job done.

You could easily carry gunpowder, but what about ammunition? 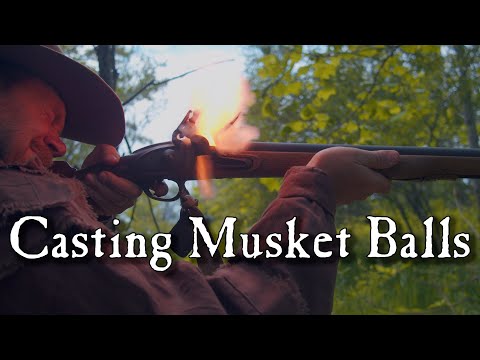 According to Townsends – a channel dedicated to preserving the 18th-century lifestyle – ammo was sold by traders on the frontier. You would find lead bullets of varying sizes at different trading posts, but these would often not fit the gun you were carrying.

Instead of buying bullets, most travelers would opt to purchase a couple of pieces of lead and make the ammo themselves.

This wasn’t the most efficient way of making molten metal, but it was by far the most convenient. Once liquefied, impurities on the surface were removed and the pure lead was poured into a bullet mold.

A lot of gun-wielding folks back then carried portable bullet molds so they could craft ammunition of their own. Since lead is a heavy metal, you could only carry so many bullets before the load started to weigh you down. In order to lighten their loads, frontiersmen would carry a small amount of ammo and make the rest as the need arose.

Like with all molds, casting the perfect bullet is nigh impossible. It’s best to remove the excess lead so the bullet can fit into the barrel of your gun. Once you’ve trimmed it down to size, you can then take the surplus and put it back into the lead-filled bowl for later use.

As explained in the video, sometimes you would get a bullet mold when purchasing certain guns. This made it easier for gun owners to create ammunition for their own since they wouldn’t have to go through the trouble of finding or making the specific bullet mold they needed.

These finished lead balls weren’t the most accurate projectiles, but neither were the round, store-bought ammunition you could buy at the time. It was a time of learning; and until bullets were shaped to be slightly pointed at the end, there would be a lot of missed shots on the frontier.

This Is How Road Barriers Have Become Safer Over the Years