Louie Schwartzberg is a director, cinematographer, and visual artist who has spent the better part of his career pioneering the time-lapse game. He’s spent three decades continuously filming time-lapse footage non-stop in his home studio using his cameras in a controlled environment.

His nature series, Moving Art, has already run for three seasons on Netflix and focuses on six aspects of nature:  underwater, waterfalls, flowers, forests, deserts, and oceans. His nature film, Fantastic Fungi, delves into the lives of various types of fungi.

So how did Schwartzberg film the growth of such slow-growing fungi? 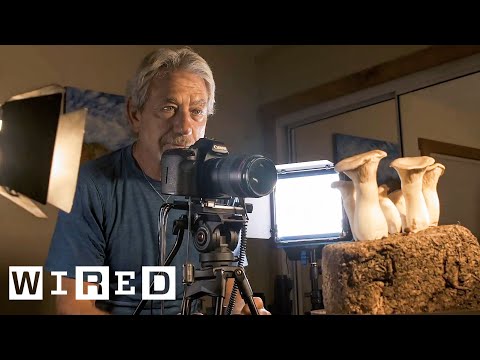 The short answer? One frame at a time. In an interview with WIRED, Schwartzberg explained that by connecting cameras and lighting to an intervalometer, he was able to take shots of the fungi at 15-minute intervals. This means for every hour, the cameras would take 4 shots. Stretch those 4 shots over 24 hours and you have a total of 96 shots/ frames in a day. Those 96 shots then translate to 4 seconds of footage in the film.

According to Schwartzberg, predicting where and how the fungi will grow is a skill he has developed over the years. The positioning of the grow lights, humidity, and type of fungi all play a role in determining the growth of the fungi. Get everything right and the fungi will grow magnificently.

Since audiences and cameras are focused on the growing fungi, Schwartzberg can use false backgrounds that imitate a natural environment. See those faraway trees that are slightly out of view? Yup! Totally fake!

Thanks to the intervalometer, cinematographers can also move the camera along a dolly. This can make some jaw-dropping camera pans of the fungi as they continue to grow.

As for the fungi’s mycelium, Schwartzberg used photographs taken from a microscopic camera and got a bunch of animators to recreate this part of the fungi digitally.

Watching fungi grow might sound like the most boring thing to do on the planet, but the way Schwartzberg films it is just so mesmerizing. Also, his philosophy of seeing the camera as a time machine is truly alluring.

Realizing people live their bustling lives like a slow-growing fungus will make you want to stop for a moment and think about where you’re actually going. It kind of makes me want to take a break for a while and watch Fantastic Fungi on Netflix to help me reflect on life and time.

Best Micro Four Thirds Cameras for Beginners and Professionals This 2021