Have you ever passed by a construction site and seen all the rebars making up the skeleton of a structure? Apart from serving as a great way to forward the plot of a movie or show with injuries, rebars are essential in reinforcing the concrete they are cast into.

It’s not such a big ask, really. Considering concrete structures are subject to a ton of punishment (weather, natural disasters, and human interference are just a few things it has to deal with), it only makes sense to give it some backup.

Concrete by itself is very good at handling compression – meaning it can take a lot of beating which is aimed at pushing the material together. What it isn’t good at, however, is handling tension – the pressure aimed at pulling materials apart. 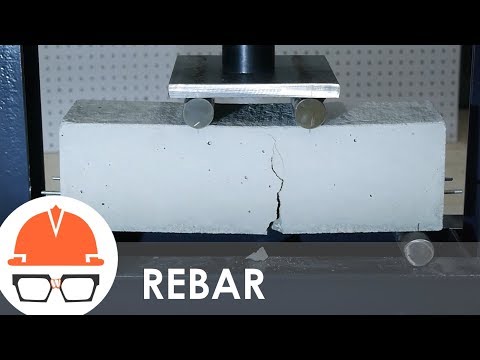 Grady Hillhouse, a civil engineer and owner of the Practical Engineering YouTube channel, showed in his demonstration just how little tensile resistance concrete has. Using a single batch of concrete as a control point, he cast two similar cylinders and subjected them to two different stress tests.

The first test deals with compression. Appling a 1,000-pound weight using a press machine caused the sides of the concrete to crumble. While you wouldn’t want a batch of this concrete to fortify your buildings, the center mass of the cylinder stayed intact – proving that concrete can indeed stand up to a lot of compressive pressure.

Compare that to the tension test. Pulling on the concrete cylinder with a meager 80 pounds caused the other cylinder to instantly snap under the pressure. For reference, that’s not even 1/10th of the compressive strength.

Hillhouse goes on to explain that most (if not all) structures aren’t just made solely out of concrete. They always have some form of reinforcement in them to help deal with the different kinds of stresses put on them.

This is why rebars are implemented. These relatively cheap steel bars aid the concrete by improving its tensile strength and ensuring the damage done to the concrete isn’t immediate.

You may have noticed how the concrete cylinder almost immediately snapped when put under too much tensile stress. That’s something the rebars are trying to avoid. By reinforcing the concrete, tensile damage will gradually appear throughout the structure that is usually in the form of cracks. This gives construction workers and engineers enough time to fix the affected area (or to tell everyone in the building to get out).

Hillhouse goes even further, explaining that rebars that have been pre-stressed provide even greater reinforcement. Usually, this means adding tension to the rebars as the concrete is being cast, but tension can also be applied after the concrete casting.

These are just the basics of concrete reinforcement. There are a lot more factors that play into strong concrete structures. Different concrete mixtures, the thickness of rebars, and nut quality and type are just a few of the things many engineers spend their whole lives researching – all just to keep you safe and sound.

If you want to know more about engineering but don’t have the time for another degree, Practical Engineering is where you want to be. Grady Hillhouse not only makes engineering topics fun to learn about, but he explains them in such a simplified manner that anyone can understand them.

Create Your Own Invisible Flame With Ethanol