Ask anyone who has played Minecraft for 5 minutes and they’ll tell you how things start off. You are dropped into a random world, then punch some trees to get wood, and you make yourself some wooden tools on a workbench. Well, the question is: can a wooden pickaxe break anything in reality? 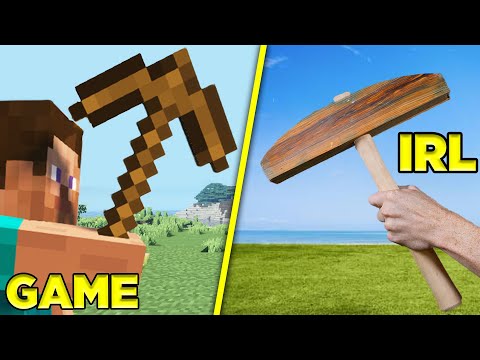 To find out, Louis Weisz made a couple of wooden pickaxes in real life and pit them against a number of rocks in his local forest.

The first pickaxe got its design directly from the crafting recipe found in the game. Using a forest stick and a 4×4 piece of hardwood lumber, Louis made his first pickaxe as crudely as possible.

Just like in the game, he took his pickaxe outdoors and tried it on some shale. While not as solid or strong as the stones found in Minecraft, the shale broke with little effort from the pickaxe.

Unfortunately, you can’t make a stone pickaxe out of shale. So to up the difficulty, Louis used his wooden pickaxe to a harder piece of sedimentary rock. It worked just as you would expect it to – with the wooden pickaxe splintering.

Proving that the design can actually work, Louis went back to the drawing board and began improving the materials used.

Instead of hardwood lumber, Louis used lignum vitae to make the new pickaxe head. It is arguably the strongest wood in the world. He attached his new pickaxe head to a long, custom-made hickory handle; making the tool look more like a sledgehammer than an actual pickaxe.

Armed with his lignum vitae pickaxe, Louis returned to the forest and easily broke down a small sedimentary rock in half. Confident that it could break a whole boulder with a little more tweaking, he returned to his workshop to fine-tune the pickaxe’s final form…

Taking a cue from Minecraft once again, Louis figured the best way to focus the wooden pickaxe’s force would be to hammer in some sharp flint at the tip.

Flint is a material that can be easily found in the game. While it isn’t used for making pickaxes, its sharpness is used to start fires.

With the improvements in the lignum vitae axe installed, Louis returned once more to the forest and tried to break a giant boulder.

While the flint did chip a few segments of the boulder, it would take way too much effort and time to break the boulder into workable pieces. So unless you’re content with breaking multiple small rocks, you won’t be making a durable stone pickaxe in minutes just like in the game.

Since he already had a wooden pickaxe, Louis thought it would be cool to pit his tool against other real-life Minecraft blocks.

Granite, while having the same hardness and breaking time as stone in the game, is way denser in real life. There is just no way a wooden pickaxe can break down such a hard material, let alone make something useable out of it.

You probably think that obsidian would also be very hard since it is a material that is needed to fashion some of the late-game weapons and tools. In reality, however, it can be so brittle that even the first pickaxe (the one with a 4×4 head) that Louise made was able to break it easily. It just goes to show that you shouldn’t believe everything you see in video games!