Most professional and amateur filmmakers and photographers have probably used a camera dolly at some point for everything from time-lapse imaging to creating smooth horizontal camera movements. Suffice it to say, those dollies can be costly depending on the rig, which is why some creative aficionados decide to build their own, which is precisely what our friend and industrial designer Eric Strebel (of Botzen Design) whipped up with his ‘HotRod’ Camera Dolly.

Eric’s dolly design was initially based off a simple $20 PVC-based camera dolly from the Frugal Film Maker, which features an adjustable pipe mount with opposable wheels. The difference between the two is Eric modified his with a motor, eliminating the need for physically pushing or pulling the rig. The only problem was the engine was too fast to get the tracking shots he needed and needed a way to slow it down. 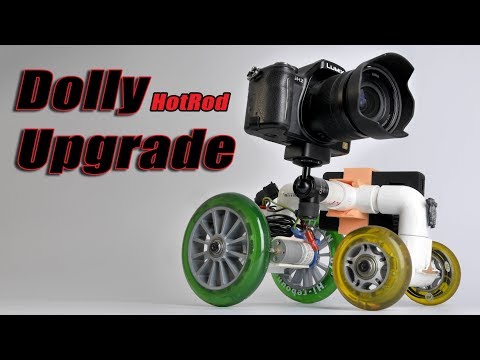 He began by machining new hubs to handle larger wheels that would help slow the rig down, which was done using larger bolts cemented into a bondo plug and then machined the material to the correct size once cured. These were then fitted into a PVC coupler, squared-off and outfitted with the more substantial 125mm wheels (vs. the 71mm rollerblade wheels formerly on it).

Eric then connected the new wheels to a direct-drive motor platform, which already has a variable-speed circuit allowing it to travel faster or slower just by adjusting a knob. An exciting feature he included was the installation of a new spring-loaded motor platform that will enable him to engage/disengage the motor entirely just by pressing on it, providing Eric the ability to quickly change the dolly’s position.

He also added a quick disconnect wire to the engine, which will allow him to easily swap-out different motors if he needs something with a little more or less power. In the end, Eric’s ingenious mods gave him precisely what he needed- a slower-paced rig that’s able to be adjusted very quickly when it’s position needs to be changed.