Entertainment giant Disney has published (pdf) an interesting study on a compliant mechanism system they’ve developed to assist in 3D design, which could be very useful for 3D printing.

What is a “compliant object”? They explain:

Fueled by progress in technology and computation, however, many fields of engineering have started to embrace deformation and to leverage flexibility for better, more elegant, and ultimately more satisfying designs. Applied to machines, this turn to the flexible leads to compliant mechanisms, i.e., mechanical devices that perform motion not through rigid articulation but by virtue of elastically deforming flexures.

Whereas typical 3D CAD systems allow the development of “assemblies”, which are discrete solid parts that move relative to each other, such as a rod rotating in a cylindrical space, or a block that slides along a rail, this is quite different.

Instead of articulations occurring between interactions of discrete objects, the compliant system will be a solid object whose articulations are implemented through flexing. The Disney system enables one to design such structures. 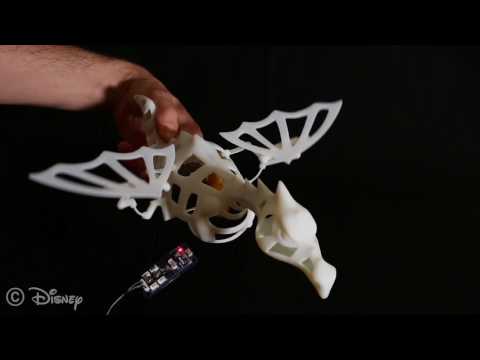 Where would you use such a system? There are several application areas where you may have difficulty assembling the parts in a system designed using traditional approaches. In particular, microscopic structures would be very challenging, and it would be of great advantage to simply produce the entire working structure in one print operation.

Another application, and this is no doubt what attracted Disney to this science, is robotic simulations of living beings, or what Disney calls, “animatronics”. The idea here is that their “Pirates” or whatever it is they are building, should appear – and move – as realistically as possible.

Because human bodies are not literally made with traditional CAD articulations, the humanoid robots of the past always moved in “mechanical ways” that were easily identifiable by eye.

I believe Disney thinks they can produce animatronic robots that move in far more realistic fashion if they can flex in ways enabled by their new system.

The system requires different computations and it seems the Disney team has developed a software engine that can accomplish these calculations. The system essentially allows a designer to parameterize the flexing action required.

It’s not clear whether their technology will make its way into existing or new CAD systems that can be used by designers, as it may be that Disney might consider keeping it in-house for their own use.

But if it was available, and if there were more ways to easily 3D print deformable objects, this could produce a bulge of very unusual functional objects. If applied to a production 3D printing system, we may even see such objects become commonplace in the public.

There are plenty of details in their PDF paper below, but you may need some advanced math to follow along.

Fusion Team: How to Access Fusion 360 in the Browser