Jimmy DiResta is notorious for his exquisite woodworks- from chess sets to custom guitars, there is seemingly nothing he can’t create.

Craftsmen always make woodworking look incredibly easy to do – when in fact even simply whittling a tree branch into something resembling a walking stick is a near impossibility for people like me. More often than not I end up cutting skin rather than wood. However, craftsmen can transform almost any piece of wood into amazing works of art. Jimmy DiResta is one such craftsman, who cannot only work with wood but leather, metal and plastic as well. On a recent YouTube video, he demonstrates three out of those four skills by restoring an old Fireman’s axe using a piece of Ash, a lot of elbow grease and a healthy dose of finesse.

DiResta took to using a sandblaster, belt sander, grinder and polisher to clean up the rust and pitting that was prominent on the axe head.

To restore the axe, DiResta took to using a sandblaster, belt sander, grinder and polisher to clear away the rust buildup and pitting that plagued the old axe head and then shipped it out to have it chromed. He then went to work cutting and carving out the handle from a piece of Ash, which was done using a band saw, table saw and draw knife for the rough cuts to get the general shape of the handle. 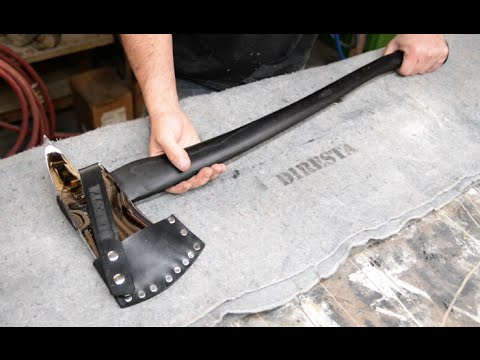 He then switched to a rasp to give the handle more pronounced curves and then cutout the handle head using a mold he made from the axe head cavity. After smoothing out the handle using an orbital sander, a healthy dose of stain was applied and then married the wood with the axe head using a wedge to hold it hold it in place. Obviously, s pristine chromed axe head needs a sheath, which DiResta made using a nice piece of black leather he cut to fit using a sharp knife and riveted it together with chrome hardware and snap buttons to secure it to the axe.

To see more of his works, head over to JimmyDiresta.com