Doom is arguably the quintessential first-person shooter that spawned one of the most popular video game genres of all time. The game is loaded with an array of traditional and futuristic weapons to decimate demon hordes–shotguns, machine guns, plasma rifles and even a chainsaw are at the player’s disposal. However, one so over-the top-weapon is sought after above all others, for delivering maximum carnage–the BFG (use your imagination for the acronym).

The game’s publisher, Bethesda Softworks recently teamed up with MyMiniFactory and designer Kirby Downey to bring the iconic weapon into the real world with a massive life-sized replica. The gun was actually commissioned by Bethesda for a contest held for the release of the newest game that came out earlier this year. As you could imagine, it wasn’t easy to 3D print a weapon of this size (over a meter long in length, 50cm in height and 50cm in width) using desktop machines, however it was a challenge Kirby and his team wanted to undertake. 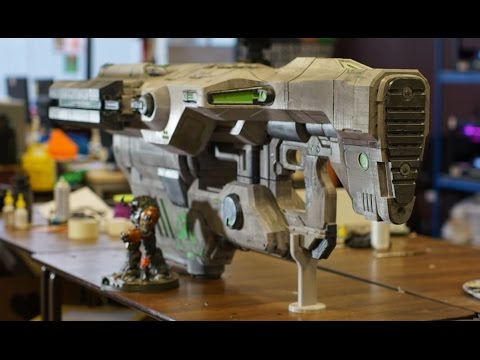 After watching the video of the design process, I was curious as to what Bethesda actually sent him to work with in order to complete the design. “Bethesda did send me the asset file. Both the low poly in game file as well as the high quality detailed files. But it was far from 3D printable, I used the file as a reference and modelled the entire gun from scratch. It is to date the most detailed model I have created. A lot of the time came down to adding the detail.”

Overall, he spent roughly 35 hours to fill in the details using SolidWorks and sliced it into over 70 different pieces before sending them to multiple MakerBot Repliucator 2 3D printers to fabricate, which took over 1000 hours to complete. To give you some perspective on the size of the weapon, the printers ate-up over 26-pounds of rigid.ink filament to build the BFG. The pieces were then assembled and then handed over to finishing artist Sarah Wade who gave it a stunning paintjob to complete the build. The final size of the BFG was a massive 18″ x 18″ x 38″ with a final weight of 38 lbs.

The BFG can be downloaded here from MyMiniFactory

Obviously, the BFG project was a huge success, so I was curious as to what he’s been doing since the build. “Since then, I have worked with Activision and Bethesda again,” Kirby tells us. “The Activision project was creating a miniature axe from the Destiny: Rise of Iron expansion. These were given out in a gift box to Destiny influencers along with other Destiny swag. The second Bethesda project I worked on was creating a Bone Ruin from Dishonored 2. These were then placed around London where gabs could find them and win tickets to a dinner event to celebrate the launch.” 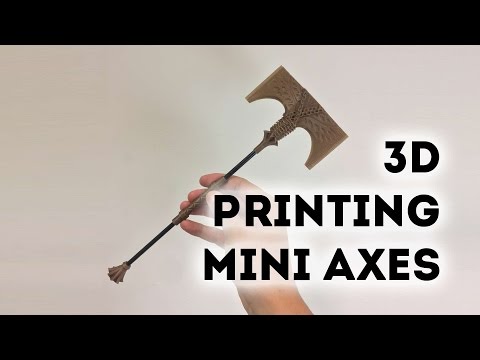 He has also created tutorials for SolidWorks, showing how users can utilize the software to create their own projects using 3D printers. You’ll find these and his own personal projects on his YouTube channel, a must see if you’re into 3D printing or prop making of any kind.