Although some of us may refer to 3D printing as “a tool in our toolbox” for when the need to rapid prototype arises, one Florida design engineer recently took the saying quite literally.

Chad Bridgewater, an employee at Florida’s Boca Bearings, recently modded an old vintage Huot toolbox to create an expandable 3D printer that can be folded up and carried when not in use. The aged toolbox, which was previously used as a “Blower Repair Kit”, featured a fold-down front panel that made it an ideal candidate for creating an expandable print bed.

To ensure that the concept would work, Bridgewater started by building a mockup using parts from old 3D printers. Although he understands the process of working with hand sketches and CAD models, he explains that oftentimes there are “too many things going on to even know where to start” and begins his process with actual working parts before finalizing a more refined design direction in CAD. 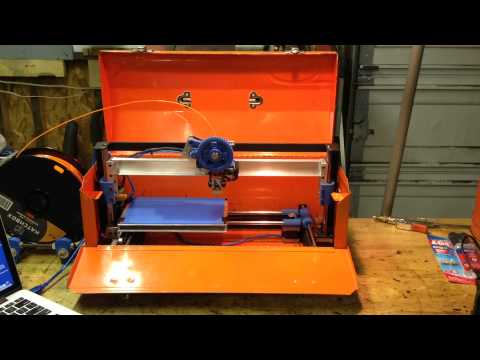 “For this build, I began with a piece of scrap ABS plastic cut down to the desired size (6″ x 9″) of my print bed,” he explains.

“I simply position it throughout the toolbox and take some measurements to determine if everything will fit and how I will proceed. I determined that I would use the X and Y-axis to control the bed and the hot end would be controlled by the Z-axis. I created a crude model of the X and Y-axis by using parts I had lying around my studio. The ABS “bed” would be fitted with some linear bearings, precision cut drill rod and some parts from a bin of 3D prints from past builds so I can check the next set of components.”

At this point, he had enough information to move into a 3D modeling program to begin modeling the components and tightening the tolerances. For this step, Bridgewater turned to Rhino for refining all of the part designs – which were then fabricated by hand or 3D printed, tested and assembled into the final toolbox design.

You can read the entire (and impressive) four-part build process in-full by heading over to the Boca Bearings Workshop: