Can You Skip Rope Fast Enough To Protect Yourself From the Rain?

I’ve always marveled at how other physically fit people could skip rope hundreds of times without missing a beat. One such jump rope aficionado is Alex Apollonov of the I Did A Thing YouTube channel, who may or may not have exaggerated his love for the sport in a recent video: 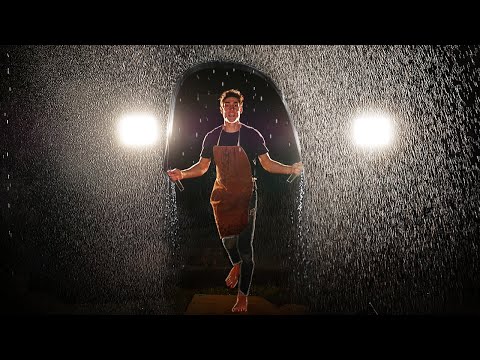 While Alex can skip a mean jump rope, he always wondered if he could skip fast enough so that he could stop rain from falling on him. After doing some simple maths, he found out that you would have to make 800 full rope rotations a second to stop every drop of rain from entering your jump rope’s vicinity. Of course, that’s a tall order for any normal human to accomplish so instead of finding the best rope jumper in the world, Alex turned to machinery.

After doing some initial tests with a cement mixer motor and finding the rotations lacking, he picked up a pool pump motor that spins at 2,830 RPM. Armed with his main rotation device, Alex got to work.

His first rope turner was made out of steel and had bearings fitted onto the edges of the blade. Even though this thing could cut your head clean off, the rotations it made were nowhere near fast enough to stop rain from falling.

So Alex tried changing the blade composition but with a wooden blade this time. And while the rotations were much faster, the heat produced by the friction between the motor and wood prevented it from reaching its full potential. Apparently, that and the wooden nature of the blade weren’t going to be able to handle that many rotations without snapping… and that’s the exact thing that eventually happened.

Switching back to his steel blade, Alex thought of adding another piece of rope to increase the number of rotations. This eventually pushed him to affix both ropes to a fidget spinner on the opposite end of his super jump rope machine. Not only would this aid in the rotations, but it would also prevent the ropes from tangling together.

This proved successful but was still not fast enough. So to cut down on the weight, Alex switched the blade’s composition to a much lighter aluminum. He also did the same for the fidget spinner by switching out the cheap plastic for an aluminum frame fitted with skateboard bearings.

After doing his final tests and finding them satisfactory, he applied some Locktite glue on the screw to prevent it from coming off, made his own rain machine off-screen, and got to the main event:

While the motor didn’t completely stop the rain dead in its tracks, it did create a fine mist in the general area. This means there are enough raindrops being displaced at such a speed. And while this experiment was a failure to fully stop falling water, Alex realized that his machine is still powerful and functional in its own ways.

Alex Apollonov’s projects don’t work every time, but he always makes them entertaining to watch. You can find all his failed and successful experiments on his I Did A Thing YouTube channel.