Can Chainmail Made From Poptabs Protect You In A Swordfight?

Hey, it’s 2021! Though we may be living in the 21st century, swords and sword making has been around since at least the 17th or 16th century B.C.

Why has such an ancient art survived so long? Well, apart from swords looking really cool and being a source of income for many a swordsmith, they actually work really well as close-range weapons. They may not hold up against today’s conventional weaponry, but if you pit it against flimsy poptab chainmail like the one YouTuber Louis Weisz created, you may stand a chance at actually winning a fight. 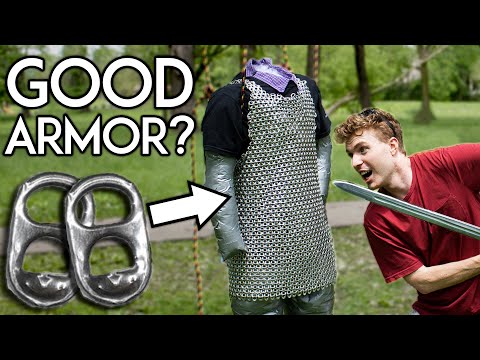 As Louis explains, you can find (and even purchase) poptab armor in all corners of the Internet. Sites such as Ebay and Etsy are just a few examples where you can get pre-built poptab armor which can probably protect you from a paper cutter, but otherwise it just makes for some good, low cost cosplay.

To put his chainmail to the test, Louis plans on using not one, but two swords. The first sword is one made from rolled up, tempered aluminum foil, while the other is a heavy metal prop he bought online. Will either of the two weapons manage to break through this armor of aluminum? Let’s find out!

Instead of purchasing one of the many pre-made poptab armors found online, Louis decides to buy a TON of poptabs and create his own chainmail from scratch. With the help of his dad, he makes cuts into one side of each poptab and uses a staple remover so they can bend and be interlinked with one another.

After what I can only assume is hours upon hours of work, Louis and his dad manage to chain enough poptabs into a piece of chainmail that wraps around Louis’s test dummy.

With the armor finished, Louis now needs to get the first of his two swords ready for battle.

This first sword is one he plans on making himself out of rolled up aluminum foil. By tightly rolling up the foil, hammering it in, and tempering it with heat, he creates a tip of an aluminum sword. He then takes this sword tip to the sander to sharpen it up for the main event.

Since there is no way hand-rolled aluminum foil can slash through layers of factory-grade aluminum poptabs, Louis plans to use the tip of his half sword to stab into the poptab chainmail and see if it punctures through.

Now for the second sword, which is a full size, heavy-duty blade prop Louis bought online. Unlike the aluminum foil sword, this baby has a lot more heft to it and was made specifically for slashing attacks.

After trying and failing to sharpen the sword using a knife sharpener, Louis takes the sword to his dad, who then sharpens it using his grinder. By setting the sword at a 30° angle, his dad manages to get as sharp an edge as possible on both sides of the blade.

With both swords sharpened and ready, Louis can finally take his chainmail-clad dummy outdoors for a first-hand introduction to pain!

He starts off with the aluminum foil sword tip he made and as expected, it does little in the way of any damage to the poptab chainmail. In fact, the “sword” actually folds in on itself when making contact with the poptabs, rendering it ineffective as a stabbing weapon the more you, well… stab with it.

Now for the test everyone wants to see: using an actual sharp sword against the poptab chainmail.

Seeing as chainmail was meant to resist slashing attacks, Louis’s first slash does little in terms of damage to the dummy. The poptab chainmail took a significant dent where the sword hit though, and it seems that with enough force and continuous attacks, it might actually break.

As it turns out, Louis’s second slash makes a clear cut through the poptab chaimal and rips it in two. Subsequent slashes only reinforce the fact that this dummy would be dead if he were alive, as they rip straight through the shirt and into the stuffing underneath.

To add injury to injury, Louis stabs the poor dummy with the tip of the sword. Unlike the aluminum foil sword he used earlier, this sword’s weight is put behind the thrust and easily punctures through the poptab chainmail like it was made of cheap soda can tops (which it is).

If you want to see more of Louis’s interesting experiments, his YouTube channel, Louis Weisz, has a ton on content in which he tests various internet rumors and sees if there is any truth to them.