Behind the Design: The Remarkable Leatherman Tools Story

Despite its myriad of uses, not everything can be solved with the common Swiss Army Knife. There are times when you need something with a bit more “oomph”; be it a heavy-duty multi-tool for the outdoors, or just one which latches onto a keychain for easy access.

In the case of the classic Leatherman tools, their shtick has always been providing a pliers-based tool when you’re on the go. After experiencing the lack of pliers himself during a trip abroad, company founder Tim Leatherman decided to add a pair of pliers to a pocket knife to make his life (and eventually others’ lives) easier. 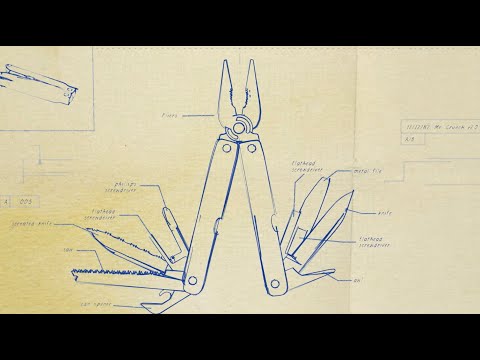 Leatherman spent the first three years of the project in his brother-in-law’s garage coming up with a prototype. He nearly gave up, too. With three years down the drain and almost nothing to show for it, it was his wife and family which spurred him on to complete his work.

Even though the prototype was complete, Leatherman had to go through years of rejection from companies who didn’t want to make his tool. Just as he was about to throw in the towel, Steve Berliner – an old friend and ping pong partner of Leatherman’s – stepped in and helped him work out the kinks in his tool. This partnership eventually led to the two becoming business partners and the future success of the Leatherman multi-tools.

Thirty models of Leatherman multi-tools have been made since the initial prototype. Some have even saved people’s lives. One man used the tool to save his leg during an avalanche, another pried himself and his wife out of a truck which was falling in an icy lake, and one keeps it as a family heirloom.

The documentary can be a little sappy at times, but it shows how hard work and dedication to a product idea you’re passionate about can create an everlasting product that many people are proud to own.