The COMBAR is the Ultimate Heavy Duty Multi-Tool

Don’t get me wrong; while the tried-and-true Swiss Army Knife is great for opening UPS packages or the occasional toothpick, it doesn’t scream “heavy duty” in times when you might need it for anything beyond that. When faced with an outdoor scenario, chances are the little knife might break under the stress of cutting a tree branch for firewood or sharpening a spear you made to ward off the park rangers.

And yet, the humble Swiss Army Knife is the closest comparison you can give to the ultra heavy-duty COMBAR outdoor multi tool from Aclim8. 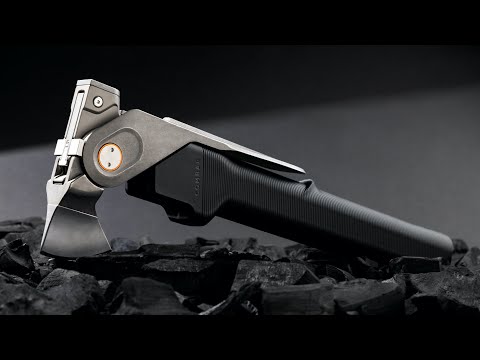 The hammer is made of 44-48 HRC stainless steel and is textured to provide traction and friction. This makes is so hammering tent pegs into the ground won’t result in you accidentally smashing your precious fingers, along with other hammer-related incidents.

The axe blade is made from the same stainless steel as the hammer, although it has a higher hardness of 50-54 HRC. The cheek of the axe (the part which doesn’t cleave skulls in half) is made from Titanium 6AL-4V. This particular tool is stonewashed to give it an “I-use-this-axe-for-wholesome-things-and-not-for-murder” look.

The spade (or “shovel”, if you like) has the same Titanium 6AL-4V make as the axe cheek and is stonewashed as well, with its main uses being digging out vehicle wheels from mud, crafting fire pits, and creating your own grave when you get lost in the woods.

The last two tools in the COMBAR can be found inside its handle. Slip out the bottom and you see that inside this dangerous multi-tool is… another set of dangerous tools (take note the knife and hacksaw are only found in the pro version of the COMBAR).

The drop point knife is made from 420 HC steel with a hardness of 53-55 HRC and is housed in a glass-reinforced nylon handle. The handle and sheath are hollow to make the knife lighter, so it doesn’t add much weight to the already heavy COMBAR.

Last is the hacksaw, which has a folding stainless steel saw blade and a textured aluminum, glass-reinforced handle. While the knife is more for cutting softer things like animal pelts and whatnot, the hacksaw seems to be more for cutting trees, rocks, or amputating your arm should you ever get stuck between a boulder and a hard place (just like in 127 Hours). Both the hacksaw and the knife fit into the handle of the pro COMBAR, so there’s no reason to have just one deadly tool inside your deadly multi-tool.

Apart from the five deadly tools, the COMBAR still has space to carry your Trail Mix, Swiss Army Knife, and whatever else you can fit inside its magazine insert. The multi-tool comes with its own belt holster, so you won’t always need to have a hand on the COMBAR whilst in the woods.

The project went through 3.5 years of development before being brought out on Kickstarter. It went through a number a number of prototypes, different designs, and a lot of punishment to make sure it would survive Mother Nature at her angriest. The COMBAR has already exceeded its $55,000 goal (it currently has a funding of $79,404). You can find out more about this deadly multi-tool there.