Interdisciplinary innovation is expanding and Derek Hugger believes art and engineering should be no exception. The artist and woodworker uses intricate engineering designs to put nature and mesmerizing kaleidoscopics of abstract shapes into motion. We found out more about everything that goes into this process and how each piece goes through hours of development, so you can make them too.

Derek’s most recent work, Colibri, is a kinetic wooden sculpture that mimics the organic movement of a hummingbird eating nectar from a flower. The intricate sculpture simulates the natural movement of a hummingbird in flight, from wing to tail, by turning a crank that mobilizes interlocking gears, and it’s absolutely beautiful, like one you’ve seen before caught in the slow-motion of memory. This is only one of Hugger’s stunning creations. He has many more, including Contrivance – a tinkerer’s dream and as Derek describes it, a “DIY Rube Goldberg machine.” The wooden modular mechanism machine allows you to build you own device, mixing and matching nine different mechanism options and tons of tiny gears into infinite possibilities. So how do these machines come together?

I create the final motion first, and then work backwards to figure out all the mechanisms that can drive those motions.”

“Along with building things, I’ve always had an interest and a passion for 3D animation. I think that’s the key that has allowed me to make sculptures that move in very specific ways, says Derek. “Trying to come up with a system of mechanisms without being able to visualize the final outcome would be a nearly impossible task for me, so instead, I create the final motion first, and then work backwards to figure out all the mechanisms that can drive those motions.”

Instead of jumping right into a CAD package, like SolidWorks or Creo, he starts in the animation software, usually 3ds Max. “In Max, I create basic forms, and move them in the ways I want. Once I get the motions worked out, I start the mechanism design. Things are very rough at this point. Nothing has to work ‘exactly,’ but I need to be confident that the basic mechanisms I animate can be translated later into something that can be engineered and built in real life.”

Once the overall architecture is worked out, the real nitty-gritty design work starts. At this point, he knows where the mechanisms will go, where most of the pivots, slides, and other moving parts will be, and can adjust the design accordingly. He starts by making some layout sketches in SolidWorks. These are simple sketches that use basic shapes, lines, and points to represent where elements will go–circles represent gears and datum points represent pivots. Doing this allows him to keep the design parametric; if he wants to change a gear size or location for example, he can just change the position and/or diameter of the circle in the initial sketches and all the subsequent geometry he creates will update with those changes.

“I use a combination of skeleton and master modeling techniques when I build up my ideas in CAD. Basically, I create my entire assembly in a single part file. In SolidWorks, this can be done using multiple bodies. Or in Creo, you create a new quilt (surface) for each part.” While building the parts, he’ll often jump back and forth between CAD and and sketching software. “I’ll use what I outlined in CAD as an underlay, sketching over it using a Cintiq. This way, I can add the style and design language I want into my parts. I can then take my hand-drawn sketches back into CAD, using them to trace out solid geometry.”

When all the bodies/quilts have been made, he breaks them out into individual part files and reassemble them all back together in an assembly file. The difference here is that now he can apply certain constraints to the parts within the assembly. “I can link gears together, for example. Or, I can make linkages work and test their motions,” explains Derek. “I also assign mass properties to the parts, so I can look at center of gravity (CG) locations and how those CGs will affect movement and balance. I can go back and forth between my master/skeleton part file and assembly, adjusting parameters that will update the assembly to to get the masses and balance points exactly where I want. Models of all off-the-shelf hardware are added in at this point.”

Though tedious, he will first create a drawing file of the completed assembly in order to generate a BOM (bill of materials), using it to make sure all the parts are accounted for, as some sculptures have several hundred parts. “I then create new assemblies, one for each sheet of wood I will cut on my CNC router. I start each assembly with a sketch representing the cutting envelope of my router. I’ll fill that assembly with parts of a particular plywood thickness. Once all parts are in those assembly files, I export each part into an STL file, which my CAM software uses to create g-code programs that drive my CNC router. At the same time, I go back to my arranged assembly files and generate hole coordinates for each hole in each part. I use these coordinates to generate some additional g-code programs for my router. This code is used to drill tiny pilot holes at all the hole locations.”

“I do this because interpolating holes with CNC routers isn’t always accurate. For example, if I have a 1/8” bit and want to mill a 1/4” hole, odds are that hole will be slightly elliptical. Depending on the stiffness of the router, it may be conical as well. Either way, those things are not good. So, I drill pilot holes instead, and then drill them out after using the exact bit size I want in my drill press. After all the parts are cut and holes drilled, I sand everything smooth, which usually takes many many many hours. Then, I cut all the metal parts I need and begin assembling. Typically, things don’t work perfectly on the first shot and tweaks need to be made. Sometimes, changes are as simple as changing a hole diameter. Other times, entire subassemblies need to be redesigned.”

Once everything is working, he goes back into CAD once again to rebuild the assembly as it’s built in real life. Why? Derek says he almost never gets it exactly right when first designing it adn if you’re creating plans for others to use, it has to be spot on. “You think you’re going to build it one way and inevitably end up doing it another way. So, when the assembly has been rearranged and proper subassemblies have been made as well, I open up each part and subassembly and reorient it to a particular perspective. I do this so that every view seen in the woodworking plans will look identical and be easy to follow. I also have to create exploded views for each subassembly. Again, BOMs are very helpful here to make sure nothing is overlooked or missed.”

“In addition to the assembly views, I also need to create views for every wood part, full scale. Because I know I don’t want to ask my builders to print paper larger than 11 x 17 inches, I limit the part size on all my sculptures to about 10.5 x 16.5 inches when I’m designing them. When all views are made, I export them into PDF format, and them bring them all into 2D page layout software. Illustrator works well here. I manually label each part, each hole in each part, each part of each assembly, and write out the paragraphs that talk about all the things that may not be obvious that you need to keep in mind while building. I typically spend 100-200 hours writing the plans for each project.”

Hugger has many amazing mechanisms to view on his website and has plans available for all of them. Contrivance retails at $29.00 and Coltrini sells for $99.00. For a mix of woodworking, kinetic sculptures and mechanical design it doesn’t get much better than this.

Josh Mings and Cabe Atwell contributed to this article. 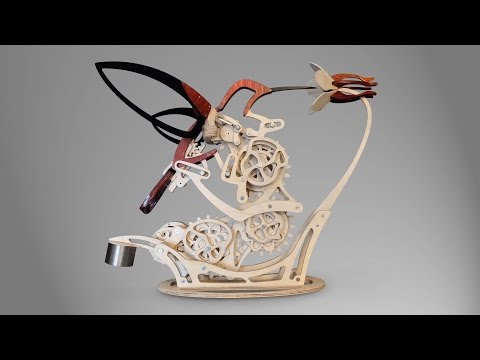 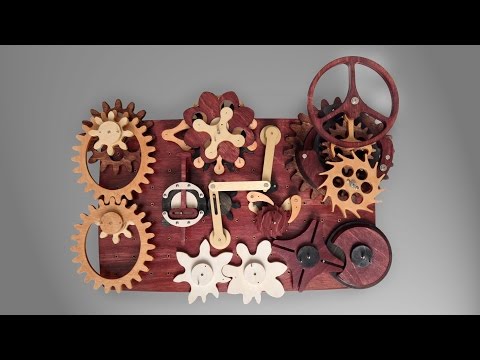 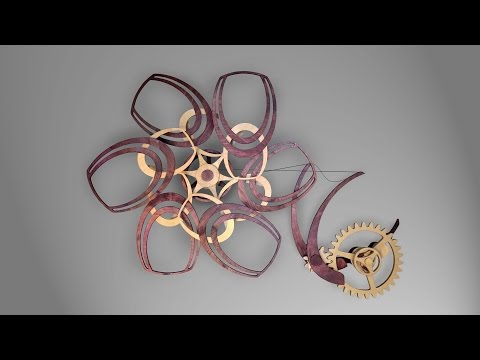 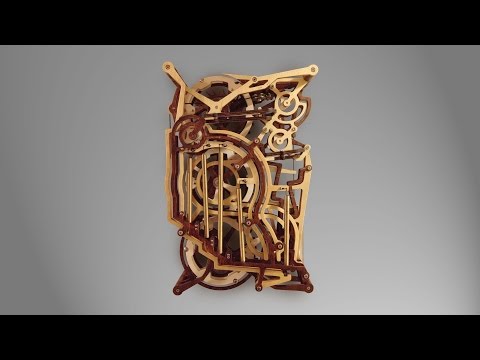 These Robots Will Change and Rearrange Your Room in Minutes