3D printing inspires us all (even if it only inspires us to be inspired). Whether it’s clothes or a drivable car, 3D printing is becoming more ingrained in our minds as a realistic solution. Another thing we’re ok with? 3D Printing + Art. Art installments are popping up everywhere, exploring 3D printing techniques and the possibilities for art. (Everything is art, right?)

Taiwanese company Atom, makers of the high-speed delta 3D printer, is teaming up with artists and designers to show how the technology pushes the boundaries of what can be created. Project: Materialize is an experimental method to showcase art and show how artists can break through limitations and restrictions of other mediums. It’s also a way to show 3D printing isn’t just for computer wizards and engineers; it can be used to create something unique, creative, and fun.

Atom teamed up with Taipei based photographer Sydney Sie for the first of the Project: Materialize series. Sydney Sie incorporates surreal imagery, gradients of color, the female body, and other graphical elements to create odd three-dimensional scenes in her photographs. (You can see another of her recent projects here.) For tProject: Materialize, she created three pieces each with its own themes.

“David’s Garden” uses the head of Michelangelo’s David as the centerpiece surrounded by various plants. The head itself is cut into a spiral making for an odd visual effect.

“Cosmic Topography” uses a space theme and has a model moon, rocket ship, rover, and astronaut for a fun visualization on space that would fit a Seasame Street segment.
Can you imagine a record store that looks like this?

Finally, there’s “Music Maker” which uses actual music devices like microphones, keyboards, and speakers and combines them with 3D printed objects. The result is bright, vibrant, and something you’d expect to find in a Peter Gabriel video. All three projects are available for download to, I don’t know, create your own art installations?

Can you imagine the steps that went into a seemingly simple photograph like this? They captured a bit of what went into the process, including the printing, the prep, the scene set-up and the photo shoot, in the behind the scenes video. 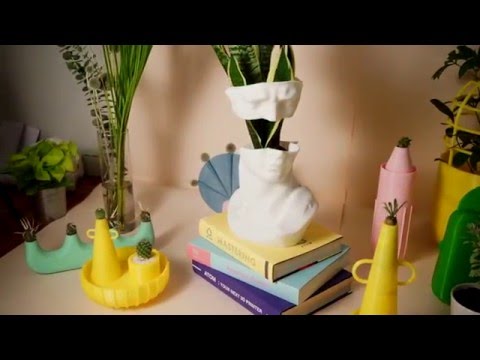 This was also an experiment into the variety and size of objects that could be 3D printed. All the 3D printed parts were made using the Atom 2.0 Delta printer. The new device is the result of a successful crowdfunding campaign and proves to be an improvement over their previous unit. It’s equipped with a solid aluminum frame, modular design, triple fan system, and has the ability to easily swap extruders. The Atom 2.0 Delta printer can be yours for a cool $1699.