Arkitypo. The 3D Printed Alphabet Project (and How it was Made)

If you’ve often dreamt of iconic typefaces exploding from your chest as you vocalize a Shakespearean sonnet, the idea of printing out an 3-dimensional representation of your monologue may sound attractive. Ravensbourne, the UK-based digital media university, adores typeface and 3D fabrication as much as you do, so it only seemed natural to illustrate the history of typefaces with the 26 letters of the English alphabet. Jon Fidler of Anything3D was the digital artist on the project. He created and fabricated all 26 of the 3D letters for the collaboration project between Ravensbourne and Johnson Banks Design agency. It is called Arkitypo and we asked Jon to fill us in on the details.

Each of the letters tell the history of the letter and the typeface in its own uniquely designed way. Some are obvious, some are not so obvious. The idea was originally developed as a means of testing and showcasing the school’s in-house 3D prototyping technology. Here is an animation of each letter, that illustrates the dimensional aspect and complex structure that can only be created through 3D printing. 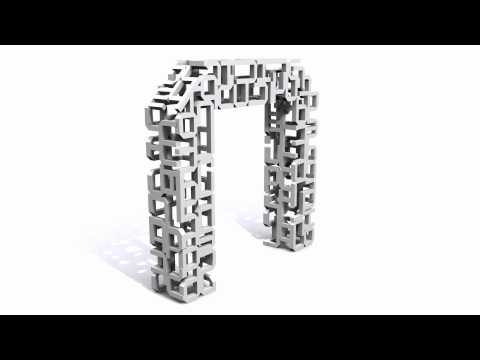 The project came about from a discussion between the consultancy who designed the Ravensbournes logo and the college. We really wanted to test and showcase the in-house 3D prototyping skills and technology, so we went to work creating a typographic project calling it Arkitypo. My roll on the design was to take the designs created by Johnson Banks and along with the help of my student Jason Taylor create all the 3d designs and prototypes for the project using a combination of Solidworks, Rhino, Autocad and 3D studio max to complete the project.

For each of the letters ‘A’ through ‘Z’, the designers selected a typeface beginning with that character, which is used in the sculptural work. Each piece encapsulates a bit of the history of the typeface: the ‘J’ adopts the form of a metro system map, because its fontface ‘johnston’ was originally designed for the london underground; the ‘C’ is composed of ‘courier’ typewriter keys, used in 1950s typewriters. For the project we used two of our in house printers to complete the project which include a dimensions Uprint and a ZCorp 450. Both machines have similar build volumes with the UPrint creating the parts in ABS and the ZCorp in their powder-based material.

The project took over 6 months to complete. Johnson Bank researched each letter, developing concept drawings and 3D renderings before sending the ideas to the team at Ravensbourne.We developed the ideas further, go through different iterations with the design team. Although people think it’s as simple as pressing print when it comes to Rapid prototyping, it’s not. The more complex the model, the more challenges that lie in your way. Starting with the letter ‘A’, here is a glimpse of the technical challenges involved in the project.

Recreating the Letter ‘A’

‘A’ naturally was the starting point of the project but ironically was one of the last letters to print. Things started very simply, but as more of an understanding of the capabilities of the equipment was gained the project began to gain momentum and the ideas got a lot more adventurous very quickly. The ‘A’ pictured below features the first to be produced using SolidWorks. We made sure that each letter was created in a prototype sort of state from the start, to dial in the thicknesses and the size for the machine. This was done to visualize different concept ideas quickly. The ‘A’ soon evolved from the simple ‘A’ shape to the more adventurous fractal version. The main challenge was how many times it could fractal before the ‘A’ became too small to print. After testing on the ZCorp, the minimum size was obtained and from there the final model was constructed in Solidworks.

The 3D printed ‘alphabet of alphabets’

B – The project was started very simply with ‘B’ and is where the ethos of the project really was derived to make “An Alphabets of Alphabets”. Once we got our hands on the idea of what we wanted it to be, we then began to elaborate on the ideas using our 3D cad skills. The final letter was created using an upwards loft that was then sectioned down using a boolean operation. I always started off trying to create the letters using the solid tools within the packages as it makes things a lot easier when it comes to printing! The B was the first to be printed and surprisingly came out correct the first time, so the one featured in the photo is the original print.

C – The first takes of the letter ‘C’ were cast out pretty quickly just due to the fact they were only objects that had no meaning. Then the idea from Johnson Banks to use typewriter keys to form the object came about. I was shown a nest of interlocking twigs as inspiration for the creation. This one, although the final solution was very simple, took a lot of tries to get right! The final solution was easy to create. It was one part within Solidworks, brought into an assembly and rotate by eye. Once it was finished, it was printed on the Uprint 3D Printer and took 19 hours.

D – Although pretty simple to letter ‘D’ had its problems within both Rhino and Solidworks, so I reverted to using the 3D tools within AutoCAD. Little d’s varying in size were printed first to derive the correct size that should be used within the final model.

E – Created using a series of extrudes and then shelled within solidworks.

F – THe letter ‘F’ was created using Rhino and a series of lofts from vectors of the letter ‘f’ and a map of East and West Germany. I had to make sure the thickness remained equal throughout so that the part wouldn’t fall apart when taken out of the printer.

G – A simple case of constructing the glassses within solidworks. The arms on the spectacles move in and out and were printed in one part.

H – The vectors were created in adobe Illustrator for the H and then exported into Solidworks as DXFs. The problem that had to be overcome in this design was creating it so that all of the logos interlocked and created one strong freestanding structure.

K – The letter ‘K’ was a very interesting challenge due to the complexity of the object. The challenge was to create solid sweeps that inter-wound with one another that were suitable for 3D printing. After various attempts, a method was derived in SolidWorks creating a path for the sweep by revolving a surface around a line. In all, it took about two days to create a working model for ‘K’, then 30 hours to print on the Uprint machine.

N – Created using all of the letters from the Neu alaphabet.

O – The letter ‘O’ was definetly a case of trial and error. An image was given to us as a guide to creating something that resembled iron filings around the ‘O’. Rhino was used for creating the design with a plugin called panel tooling, which allowed us to generate random patterns over a surface between two control surfaces. It took several attempts to make the ‘O’ but suprisingly came out looking amazing once printed on the ZCorp.

P – A perpetual 3D path needed to be created to pattern the letter ‘P’ along. A surface was also created to guide the ‘P’s so they made one full roatation along the path that was created.

Q – The letter ‘Q’ had to be created so that when viewed from a certain perspective it would take the shape of the quadrate Q. A camera view was used to achive this within SolidWorks to mimic the view that would be obtained in reality.

R – Jason Taylor used a combination of Rhino and AutoCAD to create the letter ‘R’.

S through to U – The letter ‘S’ through ‘U’ were modeled using a series of ajoining surfaces. Once created they were twisted within Rhino to obtain the effect of ‘S’ lofitng into ‘U’.

T – Created by rotating ‘T’s around a central point and then repeating the process until the column was created.

U – The first take on the letter ‘U’ took 90 hours to print. Due to the thicknesses being too small it fell apart. For the next print the walls were thickened and the part made more rigid by adding in more orbiting ‘U’s.

W – The letter ‘W’ was created from scratch. We were informed to create a ‘W’ that represented 3D calligraphy. The part used a combination of sweeping surfaces along a 3D guide line. The letter was created within SolidWorks. In order to create a solid model, the surfaces were then extruded to make the model printable.

X – Created by scaling the origional model down. The origional ‘X’ is slighlty smaller at the top so that the model stacks correctly.

Y – Created with a simple procedure of rotating the origional y around a central axis to create the coin like model.

A 3D digital artist with over 8 years experience of using the latest 3D Design, fabrication and creation technologies to create new an innovative designs. I’m a very enthusiastic person who’s always eager to use my expertise in areas that initially they weren’t intended for. Some areas that i have already experimented using my skills include the areas of Fashion, Product,interaction, Architecture and Film. In my most recently completed project whilst at Ravensbourne college i have collaborated with Johnson Banks on the worlds first 3D printed alphabet which was featured in the January 2012 edition of Creative review and will features at an exhibition at Arup’s HQ in London. I always curious to learn about new things and to sum it up i would describe myself as a energetic fast learner with a passion for remarkable design. More at Anything3D.com