Do you remember playing that origami football game back in school? The one where two players would take turns flicking a triangular piece of paper from one end of the “field” to the other, with the occasional field goal requiring you to flick the triangle through a goalpost made by your opponent’s hands?

A YouTube creator going by the name Maker Mr. Uncle has found a way to get the most out of your finger flicks. His solution: a 3D-printed finger flicker that uses the tension of 3 springs to increase the force at which you can launch your paper footballs, rubber bands, boogers, etc. 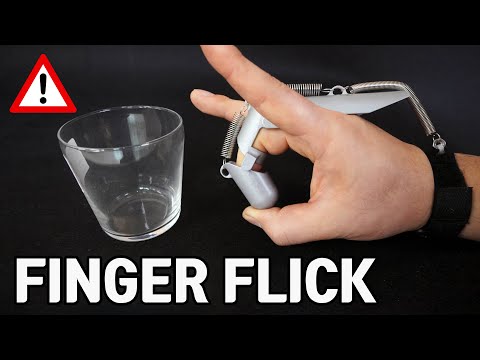 It All Starts in CAD

Because the surface looks so shiny and metallic, you might end up thinking that the device was primarily made of metal. However, the finger flicker is 3D printed using a CAD he made himself (the designs online don’t seem to fit his fingers). I’m not entirely certain as to the filaments he has used, but the resulting parts are solid enough and fit perfectly on top of the three parts of his middle finger.

Once the parts are printed, he cuts the excess material out and starts making the finger flicker look more metallic. Maker Mr. Uncle applies a smoothing putty to hide the more prominent grooves.

He then applies two layers of surface, taking enough time between each coat to let it dry before sanding it down properly. When Maker Mr. Uncle is satisfied with the flicker’s smoothness on all sides, he sprays 2-3 coats of silver lacquer to give it that metallic look.

After giving the parts some time to dry, he now snaps the pieces into place and adds the actual metallic parts to give this baby some added force – the springs.

Each end of the spring is fitted onto a hook, which slots into holes found on each of the flicker parts. The springs add tension when you bend your finger inwards and release it with a loud snap as you stretch it outward.

Since the final piece nearest the palm has no anchor point on one of its sides, Maker Mr. Uncle creates a bracelet made from a Velcro strap and affixes the final spring onto it. This keeps the finger flicker secure and increases the tension of the springs by keeping the device close to the wielder’s hand.

Using a weighing scale to test the strength of the device, Maker Mr. Uncle discovers his finger flicker can produce an output of a whopping 533 g of force. Compare this to the measly 170 g he could do with his unaided finger and you can see exactly why he really wanted to make this thing in the first place – to cause untold havoc with his middle finger without harming himself!

The finger flicker makes short work of pencils, vegetables, and other soft materials. It can even hammer metal tacks into a piece of wood and put a couple of good dents into an actual metal bowl. However, no matter what it can do, it can’t endure the wrath of an upset wife. Maker Mr. Uncle soon discovers this as he hands the device over to the love of his life and she uses it herself.

Maker Mr. Uncle has a ton of crazy DIY videos on his YouTube channel, most of which don’t require a crazy amount of expensive materials to make. Provided you can understand Korean, you might actually be able to make some of these yourself!