It seems as though biomimicry has taken on new meanings as of late—between the recent MIT Silk Pavilion and now this Dewars marketing campaign, ‘natural fabricators’ have been getting just as much attention as the latest 3D printer Kickstarter campaign. To help generate hype for their new Highlander Honey whiskey release, Dewars is live-streaming the production of various sculptures created by their army of honey bees…effectively putting a whole new spin on the current popularity of the ‘Designer/Maker’ in major marketing campaigns. 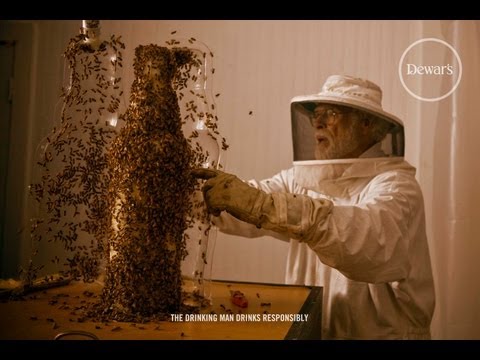 While the act of using bees to fabricate household items isn’t necessarily new, documenting the process for a documentary and including a live feed of the bees at work via social media is. When Studio Libertiny ‘collaborated’ with 40,000 bees in 2006, it took 40,000 bees a week to make a single vase:

“The Honeycomb Vase was produced through what the artist has called “slow manufacturing”—Libertíny constructed a vase-shaped beehive scaffold (to be removed at the end of the process) and then let nature take its course. Forty thousand bees built the vase, cell by cell, in one week.”

To celebrate the launch of its new Highlander Honey whiskey, Dewars is integrating a similar fabrication process with their bees to create a series of Dewar-related sculptures with a live broadcast via the company’s Facebook page. On June 28th they’ll also be releasing a documentary on the process:

For more info on the Highlander Honey Whiskey (which supposedly tastes like scotch with hint of honey sweetness) and the 3B Printing Project head over to Dewars.

The Omni VR Interface Could Have You Moving Inside Product Design