Creating matchstick art is a skill in and of itself. It takes a certain mix of patience and madness to glue thousands, if not millions, of matchsticks together to create something truly awe-inspiring which would make people wonder “Who has time to make all these?”

Matchstick Marvels is a Gladbrook, Iowa-based museum owned and operated by Patrick Acton. The place houses a number of his giant matchstick creations.

Pat has been making matchstick art for over 40 years now and what started as a hobby has now become his retirement plan, especially that his tenure as a professional career counselor is over.

Starting way back in 1977 as a college grad, Acton’s first creation was a 500-matchstick church built using Ohio Blue Tip matches, some glue, a knife, and some sandpaper. After 10 years of painstakingly cutting sulfur tips off of matches, Pat found out he could contact the matchstick company directly and purchase the matches without the flammable tips. So that’s what he just did.

Over the years, Pat has cultivated and improved his matchstick model-making process. Using pliers, he has realized that he can curve and crimp matchsticks to create models with more rounded sides. Once the curved matchsticks are glued and dried, he will lightly sand them to make them blend seamlessly with the rest of the model. (He actually learned this technique when his daughter asked him to build her a matchstick model of Pinocchio!)

Even with all these tricks up his sleeve, not much has changed about Pat’s creation process. It’s still very much about taking one matchstick, gluing it, and moving on to the next.

Pat has made models of the International Space Station, the United States Capitol, and multiple battleships with rotating turrets. Nonetheless, his biggest creation by far is a steampunk train he calls “Plane Loco”. Made using 1,029,000 matchsticks and 35 gallons of wood glue, this giant train measures 20 feet long, 9 feet high, and 13 feet wide if you include the wings.

It took Pat 3,000 hours to design and make this fictional locomotive from scratch, using a 2-6-0 steam locomotive and Leonardo da Vinci’s Renaissance wing design as inspirations. The train was actually commissioned by Ripley’s Believe It or Not and now stands in their New York City museum.

As of today, Pat has completed 74 matchstick creations, all of which are catalogued on the Matchstick Marvels webpage. His most recent project, a replica of the Apollo 11, was completed last 2020 using 504,000 matchsticks.

Pat is currently in the process of completing his 75th project: a full-size matchstick model of NASA’s new Perseverance rover. This 10-foot long, 9-foot wide, 7-foot high model has been in the works since April of 2020 and will hopefully be displayed in the museum sometime this summer. 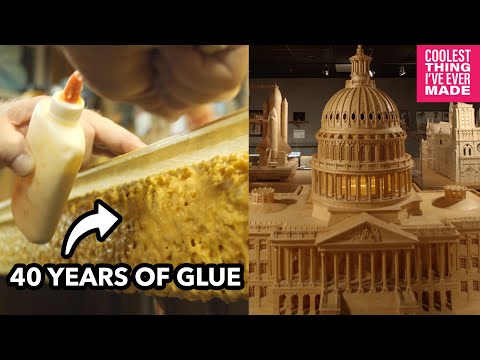 Coolest Thing actually did a pretty cool interview with Pat Acton last year where he shows them around the museum and talks about his process for making giant matchstick art.

You can find more about Patrick Acton’s monstrous matchstick models at the Matchstick Marvels webpage. If you happen to be near the vicinity of Gladbrook, Iowa, you can also give the actual museum a visit. They’re open 7 days a week from 1-5 pm.