We’ve seen some weird things cast in epoxy resin before, from a Godzilla bust to a McDonald’s cheeseburger, but never have we seen something as delicate as an ice cube encased in the permanent mixture.

There is a good reason behind this. Since epoxy casts have to be pressurized to remove the air bubbles inside the mixture, a fragile ice cube could melt or break inside the pressure pot. If you simply skip this process, your resin will look misted with all the bubbles inside – resulting in a cast that simply isn’t nice to look at.

Even with this complication, Ben from Ben’s Worx sets about casting a normal, everyday ice cube in resin. His solution? Pressurize the resin before adding the ice cube. 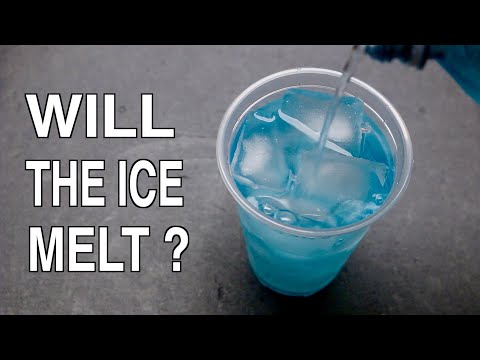 Ben had two solutions before deciding on one – the first being to pressurize the resin before adding the ice and the second is to add a base layer of resin, add the ice cube, and then add a second layer or top of it.

To start everything, Ben mixes his epoxy resin and adds a couple of drops of blue dye and pops it into his pressure pot. You’ll know the pressurization has done its job when you can’t see any air bubbles inside the resin.

Once the resin has been cleared of air, Ben has to patiently wait for it to cure.

This is where things get tricky. Ben has to pop the ice cube into the resin at exactly the right moment. Too early and the resin may not be thick enough to hold the ice in the middle; too late and the ice won’t sink in at all.

A few seconds after he sees steam rise from the epoxy resin, Ben grabs his ice cube and drops it into the mixture. You can see the disruption of the resin causes a lot of air bubbles to form as the ice gets pushed deeper into the resin. Nevertheless, Ben trudges along and uses a wooden stick to push the ice into place.

To make the finished product look nicer and easier to see through, Ben shapes his resin cast using his lathe before sanding and polishing it.

Just as it was prior to sanding and polishing, you can see an abundance of air bubbles where Ben pushed the ice cube into the resin. This is why you want to leave the pressure pot for last when casting something in resin – so that the end result looks as clear as glass.

Still, he did manage to do what he set out to. The inside of the ice cube has already melted, creating this snow globe-like effect when you shake the epoxy.

I would very much like to see what would happen if Ben tried pouring the second layer of pressurized resin on top of the ice cube, thereby removing the need to push it down and creating more air bubbles in the process.

Ben’s YouTube channel, Ben’s Worx, is full of his pet projects. From woodworking to resin casting, Ben tries his hand at almost anything with always entertaining results.

The World’s Biggest Matchstick Creations at The Matchstick Marvels Museum