When Harley Earl popularized the concept vehicle in the 1950s, it was used as a way for automakers to showcase new stylings and technologies – most of which were years ahead of any feasible production date if they even made it to production at all. In more recent decades, auto manufacturers have pulled out all the stops and have used presentations of the one-off prototypes at auto shows to showcase their refined vision of the future of the automobile – no matter how absurd or unrealistic.

Scheduled to debut at Milan Design Week on April 12th, Toyota has flipped that mentality on its head in favor of a handmade vehicle that celebrates the concept of time passing: the Setsuna.

Led by Toyota engineer Kenji Tsuji, the Setsuna concept is an actual working electric roadster composed of 86 handmade panels made from carefully chosen wood species and are attached using traditional Japanese woodcraft joinery techniques. According to the company, wood was explicitly chosen as the material as a means of expressing the idea that “love grows as time passes; the color and feel of wood changes as it is cared for; and it responds directly to the love that it is given.” 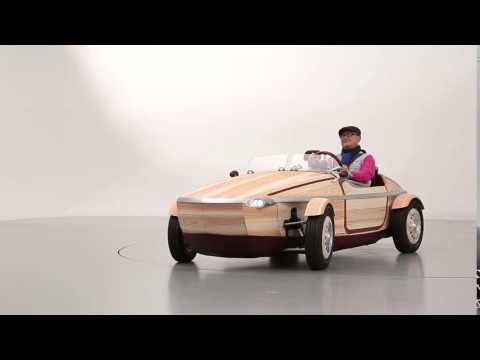 To both join and strengthen the wood without nails or screws, the Japanese techniques Okuriari and Kusabi were used throughout the entire body. To add contrast, the design team used brushed aluminum sporadically throughout the design including on the wheel caps, the steering wheel and for the seat frames.

“To proceed with the development of a car utilizing the appeal of wood, we directly spoke with experts with wide-ranging knowledge, including carpenters specializing in temple and shrine construction and ship’s carpenters. Furthermore, during this project, Sumitomo Forestry, a company that fully understands our concept, shared their knowledge of wood construction with us, and together we engaged in various types of joint development from the early stages, including wood selection and proposals for processing techniques and assembly methods.”