A few years ago, on a nice walk on the beach, knife enthusiast kiwami japan found a plastic bottle. Then he found an empty coffee can and a packet of unopened nori flakes. After sifting through the tons of trash he found washed ashore, he eventually came upon the remnants of half a shark’s jaw.

The last item might sound pretty cool, but he has a point about all those things: there is way too much trash in Japan’s waters.

That said, being eager to promote reusing and recycling, he took the half of a shark jawbone and made a knife out of it: 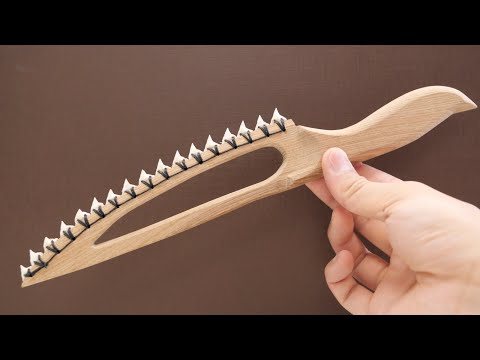 Using a hand drill, he punched holes into the jaw just under the rows of shark teeth. Then, with the help of multiple hand files, he removed the teeth one by one like an uncertified shark dentist.

Once the teeth were wretched from the shark’s maw, kiwami got to work on shaping them. With the hand files he used earlier, he carefully removed any excess bone at the roots of the teeth. This helped shape the shark teeth into their iconic (and super deadly) triangular serrated shape. After a couple of rounds with some sandpaper, and the teeth were sharp enough and ready to go!

The knife which would hold the shark teeth is quite unique; as both the blade and the handle would be cut from a single piece of wood. After painstakingly cutting through a piece of wood with a hacksaw, he carved out the thinner blade shape using his woodcarving tools before sanding the whole thing down.

To allow the teeth to fit into the blade, a small slit was cut into the cutting edge. This, combined with a number of drilled holes on the side of the blade, will allow kiwami to secure the shark teeth firmly into the wooden knife.

Tying in the Teeth

Kiwami drilled a number of holes into the shark teeth so they could be tied into the knife holes. After coating some string in beeswax, he carefully knotted all the teeth into the cutting edge of the knife.

Due to its serrated nature, this shark tooth knife couldn’t cut as cleanly as others. Rather than applying constant pressure with a single blade, the pointed tips slash at a surface repeatedly. This results in cuts that, while effective, aren’t too clean.

Still, they can puncture things pretty well. If you’re in the market for a can or bottle opener, then this will definitely do the trick.

Kiwami japan has a ton of DIY stuff on his YouTube channel, but his claim to fame has to be the myriad of knives he makes from the weirdest materials.