Since it comes with its own assembly kit, you would think that making a fire pit patio would be a walk in the backyard. That was not the case for the guys behind the Bro Builds YouTube channel.

Eager to get the most out of their kit, these DIY enthusiasts tried a couple of things the instructions didn’t specify. Some of these tricks worked, some didn’t, but ultimately, they learned a lot about making their own outdoor fire pit. 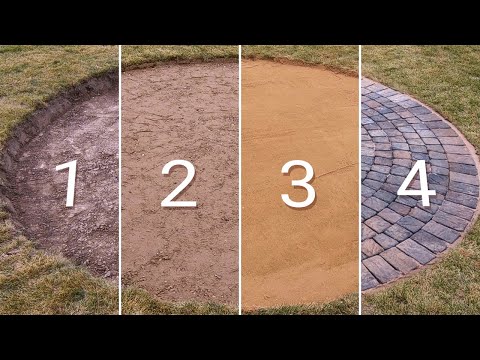 It all started with a spray-painted circle in the backyard. With a final diameter of 12.5 feet, they dug up all the grass and soil until they ended up with a 7-inch deep hole. This hole would be filled with 4 inches of gravel followed by 1 inch of sand, and ultimately be topped off with the stone pavers of the patio.

Making the Gravel Base

After flattening the soil with a hand tamper, they started adding the 4 inches of gravel. While they completed this step using a rake and hand tamper, they did recommend renting a compactor to save on time and effort.

With the gravel base completed, they began adding in the sand. They used a pair of metal conduits to measure 1 inch of space between the gravel layer and the stone patio. From here, they added in the sand and used a 2 x 4 piece of wood to flatten it all down.

Instead of pouring sand all over the hole at once as they did, they instead recommend pouring sand on one side of the fire pit and spreading it outwards. Not only would this make spreading the sand easier, but it saves you from cleaning up a ton of excess sand afterward.

When the hole was finally filled, they put on the stone pavers.

They measured the exact center of the fire pit and created a makeshift walkway using some wood pieces. At the center, they placed the center paver and began working from there. As the pavers were placed, they were hammered in with a rubber mallet to secure them into position.

Spacing the pavers to create a perfect circle became increasingly difficult as they got further away from the center. While they had no trouble making the first circle, the succeeding ones required the pavers to be spaced properly to avoid any empty spaces or overlapping stones.

Before they added the fire pit on the top, they first had to flip over a large number of stone pavers. As it turned out, a lot of the pavers were upside down. The duo flipped the pavers around, ensuring the gravel textured side was facing upwards.

Once the pavers were all right side up, they hammered them in with a rubber mallet and added some black paver edging on the outer rim of the fire pit. Lastly, they sprinkled sand to fill in the spaces between the pavers and watered it all down.

Compared to the flooring, making the actual fire pit is a lot easier.

Using a fire pit ring as a guide, they added three layers of stone in the center of the fire pit patio.

They did one last pass on the stone floor with a 2×4. Any time the wood hit a bump or drop, they would level out the pavers with a rubber mallet. Once the 2×4 ran smoothly across the surface, they sprinkled one last helping of sand before flattening it with a hand tamper and watering it down.

Likewise, the fire pit got some concrete caps to round it all out. Unlike the rest of the fire pit, these were made by a local concrete artist.

Despite some minor hiccups, the fire pit turned out great. The texture of the stone really shines at night – when a good fire is roaring in the center and everyone is around it.