The Rostock by Johann Rocholl is a 3D Printer like no other. Instead of your standard xyz gantry system, the Rostock uses 3 arms that are attached to 3 vertical axes, each independently driven by stepper motors. The end result? High-speed positioning, fewer parts, lighter setup and a look that is guaranteed to turn heads.

Delta-robot 3D printers are not very easy to build nor program. The Rostock seems to be different.

This 3d printing delta robot really seems to solve a lot of the hurdles faced by previous offerings. With other delta printers we’ve looked at the motor control of the three arms is usually a it complicated. On this build the motors can just be seen in this image at each corner under the build platform. Each motor has a belt that loops from the bottom to the top for the machine, driving an arm along two precision rods. – via Hackaday 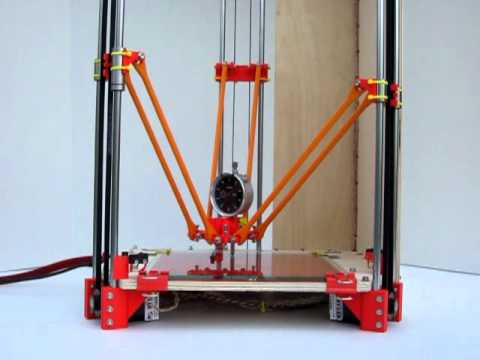 The Rostock uses an extruder pump attached to the frame, not the extruder head, giving it the killer speed and accuracy seen here. (for comparison sake, the Ultimaker utilizes the same system to attain higher speeds). Best part of this video here is when Johann (the designer of the Rostock) keeps talking to demonstrate that yes, it is moving that fast and no, its not a time-lapse.


The ultimate goals of the Rostock are simple:

One major advantage is using the tilt of the extruder to produce smoother layers. Another advantage is being able to attach a scanner to scan an object accurately. A third potential advantage is developing a pick-and-plan attachment so that a Delta 3D printer can print a PCB board, print the wiring and then deposit all the electronic components (Delta Robots were originally developed a pick-and-place for electronic manufacturers) Rhys Jones has managed to pull of 2 out of 3 of these with his RepRap (Solidsmack covered this here.) Is Delta 3D printing the next step?

Autodesk Buys Most Annoying Social App, Socialcam. What Does it All Mean?