Have you ever looked at your phone’s touchscreen capabilities and wondered, “Man, I wish there was a more wooden way to operate these media players”? If you have and are a fan of well-designed pieces of technology, then this remote control is right up your alley.

The re:puk is a wooden Bluetooth controller which allows you to manipulate your media players like an expert club DJ. Created by Dr. Alexander Hakenjos, one side of the re:puk controls the volume while the other switches the available tracks or videos. 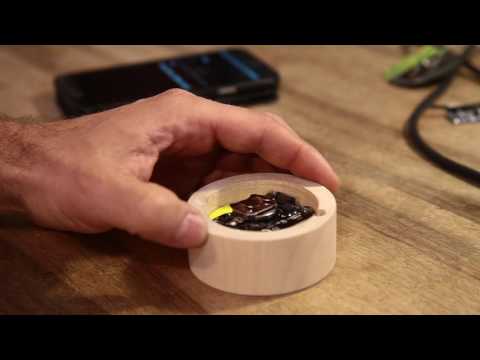 Instead of smudging fingerprints across a phone screen, the re:puk requires you to rotate it clockwise or counterclockwise to operate it. A vibration function kicks in whenever a setting is adjusted for that haptic feel making it feel more connected to the media player it is controlling.

The premise behind this circular controller is to provide a simple interface with a likewise simple design. As you can see, there are no buttons to press or switches to activate; just engravings to indicate which side lowers the volume of your teenager’s dubstep tracks and which one changes it to actual music.

The re:puk can connect to any Bluetooth-enabled device and doesn’t interfere with other attached devices such as speakers or headsets. The Kickstarter campaign for the controller just launched with first versions available for both Android and iOS apps which allow users of both platforms to stealthily control their media players. Early bird price is available for €129 ($153 USD) with additional €20 ($24 USD) shipping and an estimated December 2017 ship date. Though a bit on the pricey side, these are custom built, limited run in a design that offers a unique control option for your tunes.

Friday Smackdown: The Whine of the Tin Fairies