Pencil by 53: The New Sketching Stylus from the Mad Scientists Behind 'Paper by 53'

The iPad stylus market has seen an interesting turn in recent months with the release of Wacom’s Intuos Creative Stylus and now this morning, the Pencil by 53. For anybody who has used the iPad app Paper by 53, you might be familiar with 53’s exceptional attention to detail in the user experience and their wide community of diehard Paper users. However, their lack of stylus support (other than the Pogo Connect) put a damper on things for many users—specifically those who wanted to use Paper in conjunction with the recently-released Wacom Intuos Creative stylus. The developers at 53 have spent years ironing out how to translate an otherwise messy physical media experience into something that is clean, polished, easy-to-learn, and most importantly, fun…but will they will be able to pull off the same feat in the hardware department, too?

Pencil by 53: Too Little Too Late?

The Pencil stylus includes adaptive palm rejection (something we’ve seen for over two years now) and runs off of a lithium-ion battery that can be recharged in any USB port for 90 minutes and lasts around a month with regular usage. While the stylus can be used with any touchscreen device, 53 has taken careful consideration into how the hardware plays with their award-winning app.

“The best tools don’t require a lot of fuss — they just work. With Pencil, we’ve radically simplified things like charging and wireless connection so you can spend less time in menus and more time creating.”

The stylus design is meant to feel like a traditional carpenter’s pencil updated for today’s digital users. While this seems like a fun play on traditional media (ultimately what 53 excels at in general), the decision to make the stylus nib as wide as a finger is questionable—people don’t need a reason to replace their fingers, they want more accuracy. In contrast, the Wacom Intuos Creative Stylus excels in this department and offers the closest-to-real-life sketching experience thus far.

As a matter of fact, every feature on the Pencil that 53 is marketing has been done in some way or another…from the ability to erase, to using a secondary finger for blending media, to palm rejection and Bluetooth connections. What the Pencil does have going for it is a strong community of Paper users and an exceptional design that looks cool but might not live up to it’s hype from a usability standpoint for those looking for more accurate sketching. With that being said, the use of wood (walnut) and ‘graphite-brushed’ aluminum makes for an interesting take on not only a stylus design, but connected devices in general.

Despite its shortcomings, the Pencil is definitely a go-to purchase for those riding on the fence between prosumer and consumer stylus designs. At $50, it is priced quite competitively for the features that it offers (the Intuos Creative Stylus is $100) and thanks to it being a product of 53, you know that they’ll keep things interesting over time.

Perhaps we’ll be seeing more from 53 as they step further out of the digital world and into the physical. Just only last month they teamed up with Moleskine to offer Book—a printed Moleskine notebook that you can personalize using your Paper illustrations—essentially merging your digital and physical sketchbooks into one:

Pencil can be used on any capacitive touchscreen device as a dumb stylus and is fully compatible with the Paper app on the iPad Air, iPad 4, iPad 3, iPad mini and iPad mini with Retina Display. You can order it here. 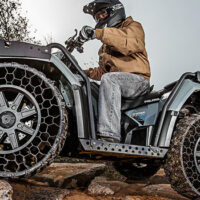 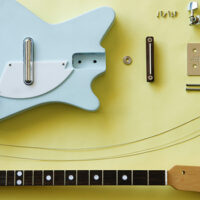 The Electric Loog Guitar: Don't Just Wail on Your Guitar, Learn How to Build It! 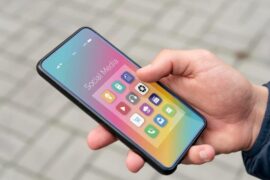 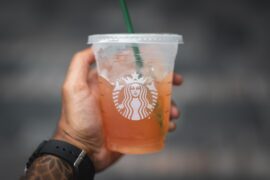