Pogo Connect Pressure-Sensitive iPad Stylus: After 4 Months of Use, How Does it Hold Up?

Having been a user of Wacom pressure-sensitive products for years, my expectations going into testing the Pogo Connect pressure-sensitive iPad stylus were set at a pretty high bar. Up until the Pogo Connect came out, I always asked myself, “Do I really need to sketch something on my iPad or can I just wait until I get to my desk to sketch something like I really mean it?” Well, the Pogo Connect has managed to find itself in the ‘priority pocket’ within my trusty laptop/iPad bag for four months now. How has it performed now that the novelty has worn off?

Four Months with the Pogo Connect

What Does it Do?

The Pogo Connect is an iPad stylus that uses Bluetooth 4.0 to communicate with the iPad and has pressure-sensitive capabilities, among others, that work with compatible apps (mainly sketching apps).

While the Pogo Connect is definitely in the upper-echelon of the iPad Stylus market, it will not drastically make you a better iPad sketcher. The same problems come into play with the Pogo Connect as they do with any other stylus. It does however have more considered options to make sketching on the iPad more lifelike and easier than other competitive products: 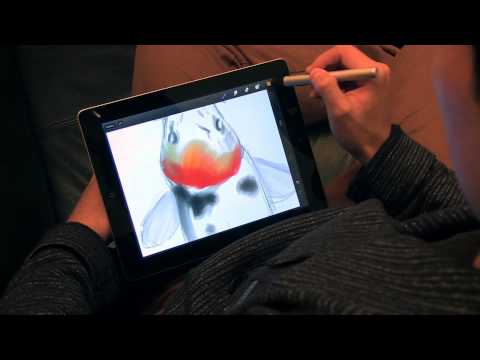 What makes this stylus more unique than others on the market is the patent-pending technology used to enable the touch sensitivity: the ‘Crescendo Sensor’, which began as a research project at Ten One (makers of the Pogo Connect). The Crescendo Sensor offers some fairly impressive traits for an iPad stylus:

-Works at all angles

-Hundreds of levels of pressure

In a nutshell, the Crescendo Sensor just feels awesome to use on your iPad. Watching a pencil line in the Paper app go from light to dark, or an ink brush going from thin to thick is a great experience and can be extremely powerful in the hands of the right user. Additionally, the stylus runs off of a single AAA battery. After four months of regular usage, I’m still using the same standard Duracell battery I installed day one. Also, the tips are replaceable however I’m yet to see any noticeable wear and tear or performance issues from my original tip. Another cool advantage is that the on/off rocker button can be used as an ‘undo’ in certain apps, effectively moving you back 5-10 steps rather quickly when you find that your perspective might be off a tad.

The pen is advertised to work with certain apps to reject your palm while sketching. However time and time again (while using Paper and Sketchbook Pro) I kept getting weird zoom ins and outs, ugly marks on my canvas, and shifting between apps due to my palm resting on the small iPad screen. Also, the support from the apps just isn’t quite there. While I appreciate what is there sensitivity-wise, it barely ever registers a very, very light stroke which is how I prefer to start out my lines. Instead of starting at 10% and moving onto 50% and then 100%, I automatically have to start at about 50% or else the controlled focus in my hand starts to cramp up after about five minutes.

For the price ($80), it’s hard to justify if the stylus is worth it to you. Previously I used the Wacom Bamboo iPad Stylus and despite it’s smaller size, I still found it to be more comfortable in my hand than the Pogo Connect. Also, I really don’t understand why the makers wouldn’t put a pen clip on this thing…or at least include one with the option of being placed on the thread underneath the top screw cap. I can’t tell you how many times I thought I had lost this $80 pen because it rolled twenty feet away, or got lost in my pocket somewhere.

If you consider yourself an artist or designer and have a strong sense of pressure sensitivity on analog paper, this could be worth the expense of $80 for you. Even with that consideration, I wouldn’t necessarily plan on creating a ‘masterpiece’ on your iPad with the device unless you’re set on doing that. For the time it takes to pinch, zoom, and switch between tools on the iPad I can have 10 concepts on my MacBook Pro with an Intuos 4 in the time it takes to do 3 on the iPad with the Pogo Connect. If you’re sitting in a coffeeshop and need to jot down some quick concepts, then I would consider this a great tool for stepping up your line weight game in the context of digital napkin sketches. If you’re just looking to get started with sketching on the iPad, I would start with the much cheaper $30 Wacom Bamboo and go from there. However after four months with the pen, I’m overall quite pleased with it’s durability and have learned to adapt to it’s shortcomings.