Back in April, the LEGO design team unveiled their latest 2,704–piece LEGO Technic model in the form of a life-like” replica of the iconic Porsche 911 GT3 RS with a build sequence modeled after the real-life vehicle’s assembly process. To keep the LEGO build process as close as possible to the same real-world assembly process of the $175K supercar, the design team even went as far as packaging the bricks into different batches to match certain subassembly processes.

The result is an impressive and detailed model with authentically designed aerodynamic bodywork, detailed brake calipers, a working gearbox, a working steering and gear system, detailed seating, functional opening doors and a slew of other considered design details.

Among others who got their nubs on the first round of shipments of the $300 kit include the fanatic YouTuber and LEGO fan Brick Builder. Naturally, the result is a build process video of the 2,704–piece model that comes in at over at over 25 minutes long – and that’s at an accelerated pace: 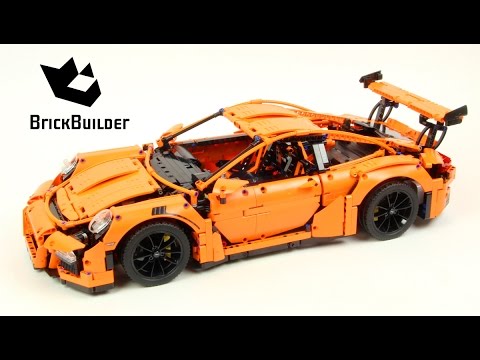 “When we started to discuss the idea for this new LEGO Technic concept, we were determined to create more than just a great building experience. We wanted every aspect of this concept to be special and drive a real desire in fans to own and build it. We reached out to Porsche as we dreamt of having a Porsche 911 as our first model. From our very first meeting, it was clear that Porsche shared the same passion for the vision of this concept and together we decided upon using the latest 911 GT3 RS as the first vehicle in this LEGO Technic series.”

At $299 (£249.99), the kit isn’t for everybody – but with a comprehensive collector’s book and a “true-to-life” assembly experience, it will most certainly be the one LEGO build that you won’t soon forget. The kit is currently available for purchase over at LEGO.