Even though I don’t play golf, I certainly appreciate how downright sturdy and impressive the design of golf balls are. Measuring at least 1.680 inches in diameter and weighing no more than 45.93 grams, these balls made from rubber and hardened plastic feature anywhere from 250-400 dimples to make them more aerodynamic and generally take a lot more punishment than something that size should.

While getting hit with a golf club or falling tens of feet from a height is the norm for most balls, YouTube channel Crush has decided to up the ante by taking a number of golf balls and running them over with a steamroller. What happens is nothing short of extraordinary.

Pitting an 8-ton steamroller against a 1.5-ounce golf ball may seem a bit unfair, and it is… for the steamroller: 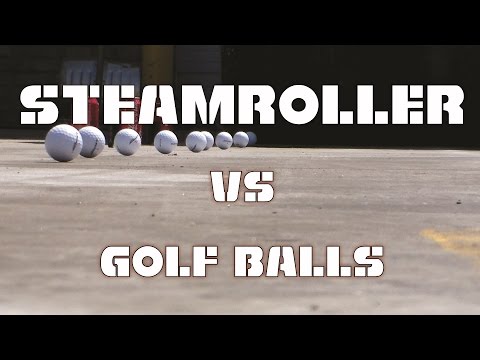 Two passes of the steamroller show the balls are pretty much unscathed. Since the balls are so symmetrical and are packed so tightly, they can withstand the pressure exerted on them by an 8-ton industrial machine.

Never the ones to give up, the guys continue steamrolling over the golf balls until they break. It takes eight passes for the balls to crack under pressure, revealing their dense rubber centers.

The Crush YouTube channel has more videos of objects getting run over by steamrollers, with most of the victims not being quite so lucky as these golf balls.