While 3D printers are certainly one of the more fun digital fabrication tools, laser cutters aren’t too far behind. Not to mention, the ability to quickly and easily create a physical product from a digital file is made all the more fun when visible lasers are involved.

Using one of the company’s laser cutter units, Raynsford setup a custom controller and pointed the laser at a series of Space Invaders that were made from paper.

To setup the Invaders, Raynsford attached each with a paper clip against the fitting slots of the back board. The board is attached to a rack and pinion which drives the Space Invaders from left to right. Additionally, a custom laser controller was made using an Arduino Nano to control the left/right/fire commands similar to the original arcade version of the game.

“I thought about mounting a rotating mirror behind the Space Invaders so they could shoot back but I decided I like my eyes a bit too much.”

To control the laser, the Arduino drives each axis to its end stop to figure out where the zero positions are and then restricts the movements for each axis between pre-determined minimum and maximum values.

To keep the game authentic, he included four player ‘shields’ made from plastazote foam so they can withstand the first blast from the laser. Additionally, the focus lens was removed from the laser so that each of the Space Invaders could be hit regardless of where their location was. Finally, Raynsford rigged up the whole system to be live streamed directly to his computer to be played in real-time. 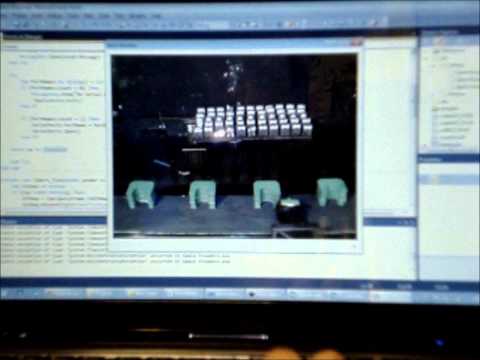 For a more in-depth explanation on the build, head over to Just Add Sharks.

Frame Is About to Put All of Your CAD Apps in the Cloud: Our Interview with CEO Nikola Bozinovic