While most folks say the best way to make a burger is by hand, a majority of them likely aren’t doing it over and over again on a daily basis. Some people love flipping patties as much as Spongebob Squarepants, but unlike the yellow cartoon sponge, they most likely want more from life than smelling like grease and meat all day.

Creator, a start-up restaurant from San Francisco, aims to change the burger game by making their ingredients fresher and their employees more…robotic: 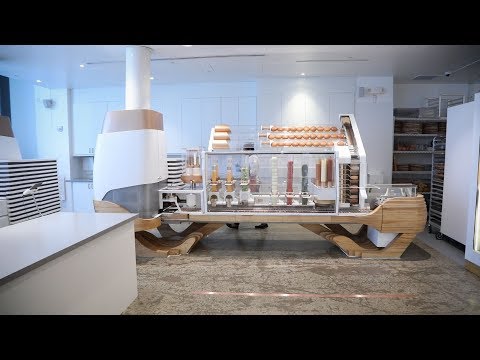 Though the establishment has its human employees, what gets customers’ attention has to be the robotic chef. Run by 350 sensors, 50 actuators, and 20 computers, this has got to be the most complex chef since Gordon Ramsay.

After a customer orders their burger of choice through a human concierge, it is sent to the robot to do all the work. A freshly baked bun is pushed through an air pressure tube where it is cut in half by a vibrating knife before being buttered and toasted. Once the buns are ready, sauces and spices measured to a “T” are spread across the pieces of bread before freshly cut vegetables get plopped on top.

To the side of the machine, the robot grinds vertical-hanging slices of beef to order. You might be wondering, “What’s so important about hanging the meat vertically?” Supposedly this makes it easier to eat the burger. Rather than vigorously chewing through it like a starved wolf, the vertical strands allow the burger to melt in your mouth.

This bun, veggie, spice, and beef construction takes no more than five minutes to prepare and costs $6. It may not be the best-tasting burger in the world (that honor is reserved for your respective chef relative), but for the comparative asking price of just about any other fast food burger, it’s not so bad.

According to a TechCrunch interview with co-founder and CEO Alex Vardakostas, the reduction of costs in labor and kitchen space allow Creator to focus on higher-end ingredients. “We spend more on our ingredients than any other burger restaurant.”

This doesn’t mean they’ve ruled out the human factor when it comes to their restaurants. In fact, Varfakostas himself used to be a burger flipper at his family’s restaurant back in the day. Instead of flipping burgers for nine hours every day, he gives his employees back free time to do something productive such as read a book or learn a new skill. He hopes this will further their skill sets as a whole and land themselves a better job.

You can read more on Creator’s burger design process and philosophy over on the official webpage. Early access tickets to the restaurant have already sold out, but you can be sure more seats will be available as the fad goes on.