As the Electronic Entertainment Expo (E3) – which can be best described as the CES of video games – wraps up today, it will cap off a monumental week that is perhaps more important than any other E3 in history; the rise of virtual reality is on the horizon and it’s going to start with video games.

But as we continue to move forward into a future of alternate realities with more advanced and responsive technologies, the appreciation for simpler technologies from days gone by becomes more apparent. Coincidentally, this was also a theme at this year’s E3, where those responsible for creating next-generation virtual reality devices were brushing shoulders with the earliest video game designers who helped create the industry in the first place.

Among other in attendance was Shigeru Miyamoto, who started his career of designing video games at Nintendo in 1977 and is responsible for creating the world’s most successful video game franchise ever, Mario.

Considering how many of today’s video game designers have converted over to digital tools for their design process, it’s refreshing to see how Miyamoto’s early sketches aren’t too different from a traditional product engineer’s initial sketches.

The event was to help promote Super Mario Maker, an upcoming video game release from Nintendo that aides video game designers of all skill levels in creating their own game levels: 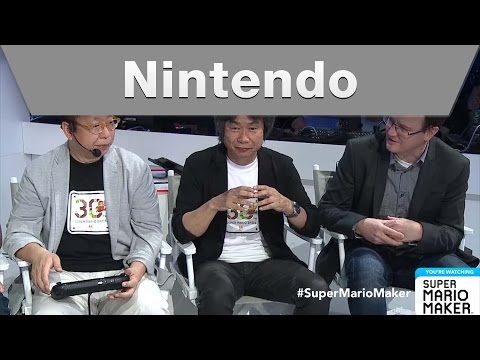 Find out more by heading over to Nintendo.