From the terrifying Terminator-like models from Boston Dynamics to the slightly less terrifying ice cream-serving Yaskawa-kun in Japan, there’s no denying that the age of robot assistance is upon us. That said, just like humans—no two robot models are the same. And what better way to test the dexterity of one robot from another than the old IKEA furniture assembly experience—itself a test of sorts for human dexterity?

Recently, robotics researchers at Nanyang Technological University in Singapore successfully instructed a pair of industrial robot arms to complete the assembly of a common IKEA chair (the Stefan) using “no special provisions for robotic assembly.” That said, the researchers did present the robots with 3D images of parts and a scan of the assembly instructions. The autonomous robots then had to use 3D cameras and sensors to assemble each step along the process without damaging the parts.

The result—while not fully autonomous—is one more glimpse of our inevitable robot-assisted future: 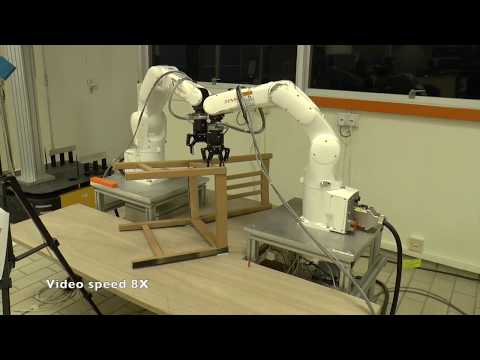 Sure—assembling an IKEA furniture set in 20 minutes may not be the most exciting or complicated task in the world, but for an autonomous robot to construct a chair by merely having some context behind the parts and reading the shoddy, human-created assembly guide is still pretty damn impressive. After all—there at least enough humans who can’t figure out IKEA builds to warrant a large enough market for IKEA furniture building assistance.

Head over to Science Robotics to read the research paper in full.