With Siggraph 2015 coming up in just over a month, researchers and software engineers are gearing up to show off their latest 3D software developments that have been in works in progress over the past twelve months.

Developed at Columbia University by Timothy Sun and Changxi Zheng, the software allows a user to specify where and how a 3D model of their choosing will be sliced up to feature what they are calling “Twisty Joints”, which are similar to the joints found within a Rubik’s Cube.

The object can be everything from a primitive shape – such as a cube – to a complex organic object such as a 3D print of one’s bust. Once a user has uploaded their model, an algorithm created by Sun and Zheng automatically defines where the parts are split out of the solid object and how those parts rotate against each other as an assembled object. If there are errors in the model – such as an elongated part – the software will automatically correct these features while retaining as much of the original form as possible. Ultimately, the goal is to create rotating sections that can move without collisions. 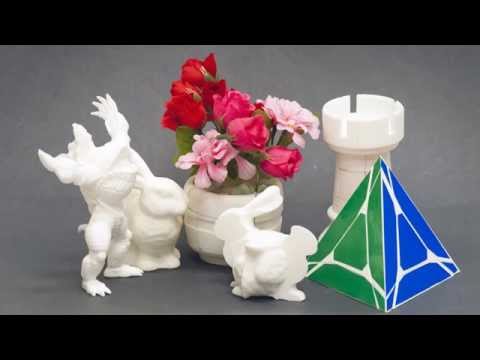 “We present the first computational method that allows ordinary users to create complex twisty joints and puzzles inspired by the Rubik’s Cube mechanism. Given a user-supplied 3D model and a small subset of rotation axes, our method automatically adjusts those rotation axes and adds others to construct a “non-blocking” twisty joint in the shape of the 3D model. Our method outputs the shapes of pieces which can be directly 3D printed and assembled into an interlocking puzzle. We develop a group-theoretic approach to representing a wide class of twisty puzzles by establishing a connection between non-blocking twisty joints and the finite subgroups of the rotation group SO(3). The theoretical foundation enables us to build an efficient system for automatically completing the set of rotation axes and fast collision detection between pieces. We also generalize the Rubik’s Cube mechanism to a large family of twisty puzzles.”

Once the solid object has been split into the designated amount of parts, hinges and grooves are added to aide in the manufacturing and assembly process – which is as easy exporting the pieces as STL files and printing them on a 3D printer.

While the software is still in a development stage leading up to SIGGRAPH in August, those interested can head over to the Columbia University’s site to read the paper in-full.