If we were all being honest here, there has to be at least one time where we have all hoped for that never ending supply of LEGO bricks of choice. Thankfully, there is now a virtual option for owning thousands upon thousands of the iconic bricks without the need for physical storage space and the inevitable stepped-on-brick foot pain. Oh yeah – it’s also free!

The models can be built either entirely within the virtual experience or enthusiasts could use Meca Bricks to plan complex LEGO model project blueprints before recreating them using actual bricks and parts – perfect for those LEGO Architecture projects.

The fact that the free Cloud-based app offers a high quality 3D software experience in your browser without requiring an install of any downloadable files or plugins is clearly a nice touch. The WebGL-based interface is efficient and feature-rich, yet intuitive and easy to get started in. Navigation is simple: users can smoothly move around the LEGO parts in all 3 axes similar to existing CAD view navigators. As for those who want to create large-scale projects, the brick inventory is exhaustive and users gets the choice of using a wide variety of bricks in various sizes, types and colors.

Perhaps one of the most impressive features however, is that Meca Bricks allows users export and download the 3D files they created in .STP and .OBJ formats so that the models can be either 3D printed or rendered in a third party software environment. The Software also has an active community of LEGO model enthusiasts where they exchange ideas and knowledge in the field. Also available are sample models shared by the community members to be used as a tutorial and reference to build beautiful and complex Lego sculptures. 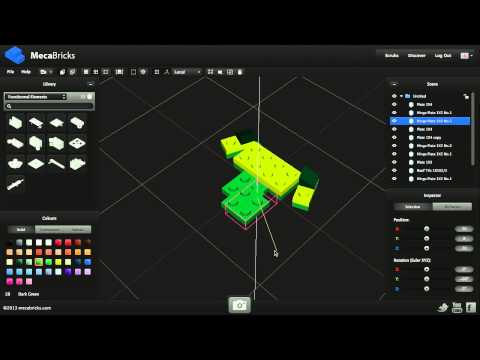 Try it for yourself over at Meca Bricks.