Well, wouldn’t you know it. The temperatures have dropped 20 degrees in the northern hemisphere, so that can only mean one thing, a new release of SOLIDWORKS is here. It’s SOLIDWORKS 2016 launch week and this year Dassualt is adding something to the mix.

With previous launch events, DS SOLIDWORKS relied on a small band of bloggers and press gathered at the Massachusetts HQ, wined, dined and sat in various conference rooms to see-tweet the highlights of each new release. They’re doing the same this year, but inviting you along to watch it live.

Your expectation of carnival horses, colorful light effects and free popcorn may be dashed, but take that idea, replace it with you in front of a screen, your headphones, some interns in corporate polos clapping and jumping about, feature preview after feature preview, and a robot with a morning ‘i-love-you-can-i-get-you-some-coffee’ stare, to magically manifest the experience that will be the SOLIDWORKS 2016 live stream.

The live stream kicks off Tuesday, September 22 at 10 AM. You can register here to see what you may have seen previewed at SOLIDWORKS WORLD 2016 or used during the SOLIDWORKS 2016 beta.

Dassault Systemes is introducing the new features with a new mascot, Baxter from Rethink Robotics. Baxter is the smart, lovable(?) redefinition of assembly line robotics and, of course, designed using SOLIDWORKS. The SOLIDWORKS 2016 introduction video (below) and the launch site both use Baxter b-roll and build details to breakdown the new features and highlight the design process all at the same time. 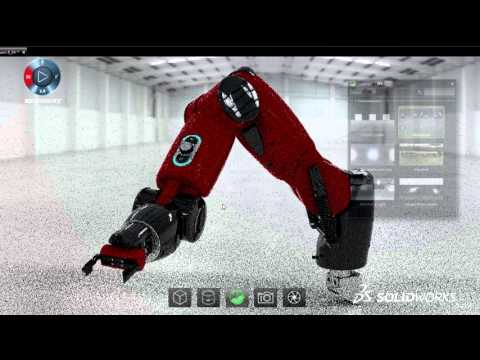 We’re sure you’ll see more of Baxter during the live stream and, possibly, his seductive gaze in your dreams/nightmares. You can get a knock down, break out overview of the SOLIDWORKS 2016 features at solidworks.com/launch/ and register for the live stream here.

What feature has your name on it? Is there a question you want us to ask SOLIDWORKS this week?