Oh, the undulating waves of SolidWorks surfacing bliss! Yeeeeah… ‘bliss’ is hardly the word one would use when creating advanced surfaces in SolidWorks. We thought that would all change with the T-Splines plugin, but a new plugin on the SolidWorks block is about to make a big splash. Next week at SolidWorks World, Integrityware will officially launch Power Surfacing for SolidWorks, a plugin that brings freeform (SubD) surfacing to SolidWorks. This is the real stuff folks. Plus, it’s already available for purchase.

First, Integrityware brought you Power SubD-NURBS for modo. We sensed hope for working with CAD geometry, but for those who wish to avoid working in another modeling package, it just wasn’t ideal. Integrityware was smart enough to realize this and also pick up on the dismal vibe flowing from the T-Splines acquisition by Autodesk. Hence, Power Surfacing for SolidWorks. The integration and the amount of features in this plugin is nowhere shy of comprehensive. It’s integrated with the SolidWorks Ribbon bar, has it’s own Property Manager and Context menu.

It works just as you’ve likely dreamt of surfacing to work in a 3D CAD package like SolidWorks and if you’re already familiar with SubD modeling software like modo, the tools and surface manipulation will be second nature. You start by creating a Control Mesh from a SolidWorks sketch. From there you have the ability to extrude or create edge loops, with menu options for selection and modifying faces and edges. Each Control Mesh you create acts as a separate feature in the SolidWorks FeatureManager Design Tree. Once you finish editing the SubD surface, the plugin converts it to a NURBS surface that you can then be used as a base for additional features Like other features in the history of the Design Tree, you can go back to edit and change the SubD surface with any child features created after it updating.

The Power Surface SubD geometry is converted to a NURBS surface for use in SolidWorks.

One great feature about this plugin is that you’re not limited to what you create in SolidWorks or what you can import from other packaged. You have the ability to work with both and between the two. Power Surfacing provides SolidWorks users with two primary workflows:

I’ll stop here to complain that functionality like this should have been in SolidWorks since multibodies were possible, but I’m glad to see it now so well integrated into the SolidWorks interface. Power Surfacing for SolidWorks is already available for a a pre-launch price of $750 at the Integrityware web store. A pricey plugin, especially if that’s the pre-launch price, but still a price many would justify to have that surfacing capability within SolidWorks. You?

You may remember Mark Biasotti mention the use of Power Surfacing in the post SolidWorks Doesn’t Do Planes, Trains and Automobiles.

“Using Power Surfacing was a refreshing change and with far fewer features as compared to the 2400 feature car body file. I have to say that Sub-D modeling for objects like these really saves time and puts the word “fun” back into modeling.”

I’d agree. Here’s a 15 minute video that breaks down the process of creating and working with surfaces uses the plugin. What for the launch next week and if you’re at SolidWorks World next week, you can see Power Surfacing in action at Integrityware booth #1012 on the right side of the Exhibition hall. 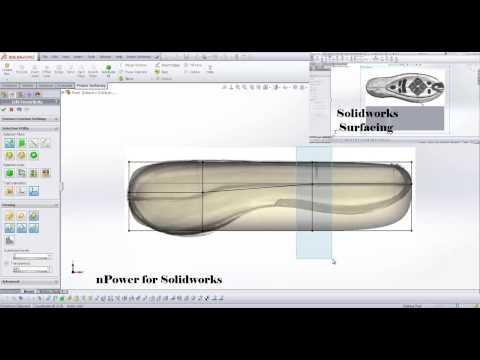