Remember when I wrote about the Playdate? That little video game console with a low-res, black-and-white screen and a hand crank on the side?

That was back in 2019. The console was supposed to come out last year but with the world being the way it is, creator Panic had to postpone their blocky handheld dreams.

But it’s 2021 now, and Panic has brand new news regarding the Playdate. In their first ever Playdate update last June 9, they talked about the console’s present status, some new games, a new peripheral, but most importantly, an updated price and pre-order date. 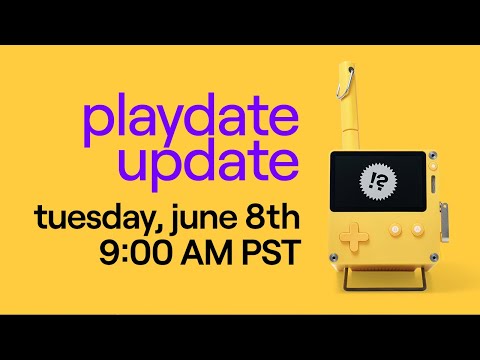 While the console has its own USB-C to USB-A cable charger, you might want something with a little more class to store your Playdate on. That’s where the Playdate Stereo Dock comes in.

The first ever peripheral for the console, the Stereo Dock, has a number of functions:

Just like the Playdate itself, the Playdate Stereo Dock is designed by Stockholm-based electronics company Teenage Engineering and will be a separate purchase from the main Playdate console. Prices are yet unannounced but hopefully it’ll be ready in time for the Playdate’s launch.

One of the Playdate’s biggest selling points is that you won’t know the games you’re getting until the day they are released and downloaded into the console. While this may be a red flag for some, others enjoy the idea of getting a surprise game every week.

The first season of Playdate games still runs for 12 weeks but instead of getting a single game every week, you’re getting two. A total of 24 games will be released in Playdate’s launch season, including Time Travel Adventure, Lost Your Marbles, and Saturday Edition.

This is usually the part where I talk about the games but since they’re supposed to be a surprise, I won’t! All games will be free as long as you have a Playdate and an internet connection to download them.

That’s the near future of Playdate set, but what’s on the horizon?

Playdate partnered with developers Sweet Baby, Inc. to create a bunch of games specifically for their console. Lost Your Marbles, one of the company’s games, is already slated for Playdate’s first season. Down the line, however, they are working on two new games: Reel Steal and Recommendation Dog.

Both games are being led by veteran developers and are staffed with first time and marginalized developers. This, Sweet Baby hopes, will make entry into the game industry more accessible to people from all walks of life regardless of their disabilities or experience.

If you don’t know who Lucas Pope is, he’s a veteran game developer who worked on hits Papers, Please and Return of the Obra Dinn. Both games used low-res, black-and-white graphics and could run on a potato, so it’s no surprise he’s working on something for the Playdate.

His newest game, tentatively titled Mars After Midnight, is still early in development but looks very interesting. In the short demo, he used the Playdate’s hand crank to look through a mail slot of a house set in Mars. You can view your surroundings this way, as well as various aliens peeking through the other side. There isn’t much to talk about yet, but you can be sure Pope will be using the Playdate’s unique hardware to his advantage.

Make Your Own Games

There were a ton of developers shown in the update, but the most important folk among them all is you. Yes, you!

Even if you don’t know how to code, Playdate Pulp is a web browser tool which can help you make your own games. Inspired by Adam Le Doux’s Bitsy Game Maker, Pulp lets you make graphics, music, script actions, and many more to make the game of your dreams. Once you’ve made your game, you can upload it to your Playdate and test it out yourself.

Just like Bitsy, Pulp will be completely free. It will release later this year.

Two years ago, the Playdate was set to cost $149. This year, the Playdate costs $179. Why the price increase? I don’t know, but hopefully this will be the final price before the console actually releases.

Speaking of releases, there still isn’t a release date for the Playdate. All we got from this update is that pre-orders are set to begin sometime in July this year. You can head over to the Playdate webpage to find out more, but here’s to hoping Panic puts out a bunch more updates before their retro handheld console releases.

Make Your Own Hook Knife Using an Old Metal Wrench