Like an attack of digital line drawing glory, the digitized stylus onslaught is finally making it’s way into the tablet accessory market. You probably remember the Wacom Inkling that sucks your physical sketches into its digital software, layers and all. That idea is finally being delivered into the iPad domain with eFun releasing the aPen A5 Smart Pen early 2012 for the device. Details are sparse, but you can see the quick, fluid sketch action in the video below and start dreaming of all the wonderful scenes you will digi-ink on that screen. Hit it!

Just look at this guy go! The video looks ever so slightly speed up, but you’ll notice no worries about palm on surface interference. Plus, the UI, fluid strokes and responsiveness of the pen are simply incredible looking. However, in the kanji writing segment, there is an annoyingly amount of line thickness adjustment. Yes, no pressure-sensitivity, so once again you’ll be tapping that screen repeatedly to adjust that line thickness as shown. 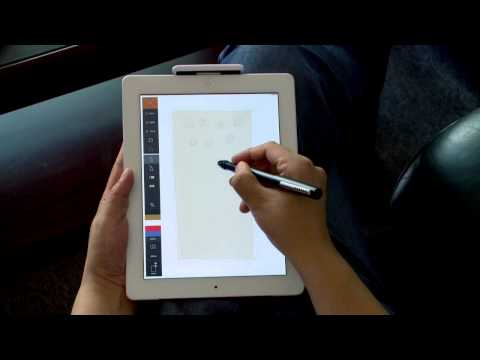 How's It Made? Old-school Fab Puzzler No.01