Until that fateful day when someone manages to create a self-thinking synthetic android, we just have to continue making robots which unquestioningly follow our orders. This robot, created by imgur user HenschelRobotics, may not have the legs nor the mental facilities to overthrow mankind, but it can balance itself through the use of two “HDrive” IoTmotors.

The motors, which are manufactured by the Swiss startup company Henschel Robitics, are Ethernet-based and monitored through a PC via Wi-Fi. As Henschel describes it, the motor is an “IoT enabled servo drive… [offering] a quick and simple start as well as a deeply configurable control system.” All the user has to do is open a web browser, set two positions per motor, and assign them to two different buttons. With it, a person can control the position, speed, and torque of this block of wood on wheels. Like this: 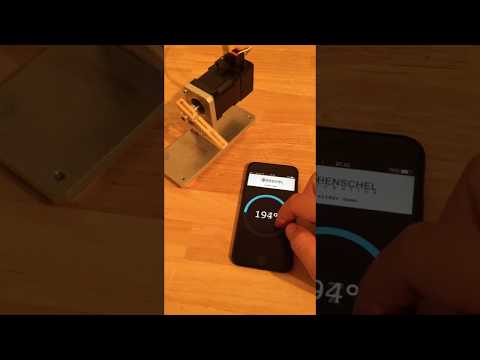 The software used to control the robot is a combination of MATLAB and Simulink. MATLAB uses algorithms to propel the robot backwards and forwards, while Simulink helps adjust its positioning and balance. The Internal Measurement Unit (IMU) data, which is collected from the suspended iPhone on the machine, gets sent to a host PC and is processed using these two programs to keep the robot balanced.

It may sound like the machine requires a lot of programming, but the brunt of the work is actually mitigated by the HDrive motors themselves. By cutting down on precious programming time, users can spend more time rolling the robot down stairs instead of worrying about the logic behind it.

With the HDrive being released into the market starting at CHF199.00 ($206 USD), you might want to prepare to bow to our new robot overlords or, at least, how you can motorize everything in your house.