How spoilt is your fish? Like, do you take it for a walk, buy it a fancy tracking collar with camera or feed it in a diamond-encrusted bowl? Blah, no excuses, the least you could have done was get it a new set of wheels and made it independent. Yup, if you would have invested in the “Fish on Wheels,” your Goldie would have been zipping across the living room by now. 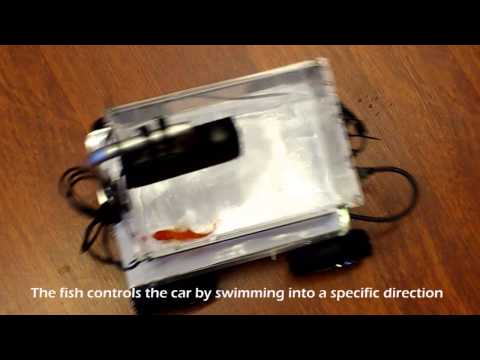 The brainchild of the team at Studio Diip, the “Fish on Wheels,” made its was to Kickstarter but failed to sizzle. However that doesn’t stop us from admiring the ingenious design and the creative thinking behind the project. The concept is basically Fish on Wheels – meaning the aquarium is set on wheels and moves because of the motion of the fish.

How? Well, camera and computer vision software does the trick; it allows the fish to control a robot car over land. While your Goldfish swims happily in its comfy waters, its motion triggers the aquarium-on-cart to move. According to the designers, the main vision behind this project is to showcase that “computer vision technology is not just limited to the usual automation projects or information gathering. It can also create interactions that are so simple that they can empower animals.”

The tech used in this project includes a standard webcam, a battery powered Beagleboard-XM and an Arduino controlled robot vehicle. The vehicle moves according to the contrast of the fish with the bottom of the fish tank. This aspect determines the fish’s position and sends commands to the Arduino to move the cart into that direction. In essence this is a completely stand alone device.

– A camera looks down in the fish tank to detect the fish’s position.
– It then powers the motors to steer the car in that direction.
– The car consists of four key components: a camera, a small computer, DC motors and a battery.
– Programmed computer vision algorithms allow the computer to find the position of the fish.

The concept is indeed innovative, however we are not sure that the fish has any clue that it can join the brigade to find ‘Nemo.’ Dang! Let it stay in the jar on the table, perhaps that is the best.