TechCrunch Disrupt Berlin brought together startups and tech enthusiasts from all over Europe November 29-30, 2018. I stopped by to bring you the highlights.

The scale of the event in Berlin, Germany was noticeably smaller than the one in San Francisco, which we covered here. Disrupt San Francisco reported around 7,500 attendees while Disrupt Berlin expected about 2,500. It was also a 2-day affair versus San Fran’s 3 days of geeking out on tech. While there was still a great variety of talks and displays, the smaller scale meant fewer overall spotlights on drones, robotics, HW, and other fun stuff we like to see.

Still, there was some good stuff there! Read on for those bits or see the video here: 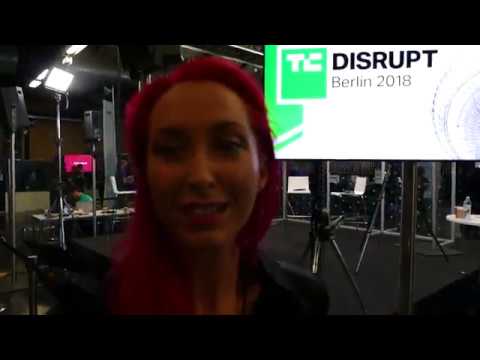 Talk: “Racing to the Future” with Lucas di Grassi of Roborace

The first talk on the main stage was a great one! Lucas di Grassi, the champion electric racing driver (‘cuz that’s a thing), talked about replacing racers like himself with autonomous driving. Or, at least, creating a new category of racing. He’s CEO of Roborace, a company developing autonomous racing vehicles and the competitions for them.

One of the first questions the interviewer wanted to ask was: why autonomous racing? What’s the point? Who wants to see that?

Di Grassi had a great answer that could be applied to many other autonomous endeavors. Traditionally, when we as humans have built vehicles, they had to be built for human limitations. However, when you’re building an autonomous vehicle, there is a much smaller chance you could kill somebody. When you have no concern for driver safety, you can do some wild experiments with automotive engineering. Some of those experiments inevitably would lead to improvements trickling down to cars made for us mere mortals, too.

The other part of di Grassi’s sales pitch is: he hopes when the public sees autonomous vehicles do crazily-impressive things without crashing, this will hasten an increased trust level of autonomous driving in general. That, in turn, could accelerate the adoption of this tech in the real world.

Race car design apparently gets a lot sleeker when you don’t have to fit an animal inside!

Only one of the days of Disrupt Berlin had sections in their exhibitor hall, er. . . , exhibitor aisle for “Games” or “Hardware, Robotics, and IoT”. Here are some of the interesting projects that stood out to me.

AR4.IO partners with DAQRI to use their AR headsets for industrial applications. The primary use is to help experts remotely guide industrial workers who are doing complicated on-site work. This means highly trained personnel don’t need to waste time commuting to each industrial site that has a problem. They can just tune in to what an on-site worker sees and guide that person via the AR display.

I ran into ClarK after stopping by AR4.IO and was surprised to see their very similar product in the same place. Well, at least the overall application was similar. ClarK is developing smart glasses for industrial workers, too, but their version will likely be much cheaper and comes with additional sensors.

They pack in thermal imaging, temperature and humidity sensors and radar to their specs. Instead of a fancy DAQRI headset, they’re using custom hardware very similar to an inexpensive smartphone. Because ClarK’s glasses can help workers navigate hazardous environments and are also rather inexpensive, it’s not as big of a loss if they get damaged in those places. I just hope companies purchasing these still hope to get the workers wearing them back in one piece!

SYNE is a fun music creation app that even a child could use to string together beats and harmonies. All you have to do is tap boxes to turn on sounds at different times in a repeated loop.

I enjoyed playing with it but wasn’t able to capture the sound well on my camera. To check it out for yourself, you can download it from the Google Play Store here.

If you stopped playing bumper cars years ago because it just wasn’t intense enough for you, there’s good news. It’s now possible in some places to amp up this game with VR! Z+ (“Z plus”) is a company bringing VR to a bunch of traditional amusement park rides. This changes up the experience if you ride more than once, and also allows for some rides to become a competitive experience.

One example I was given was pitting 2 groups of riders against each other to see which group could get the highest percentage of riders with hands in the air. These VR add-ons are already at some parks around the world including one in Orlando, Florida (no, not Disney World).

I gave you all a peek at the gigundous after party for the San Francisco Disrupt ’18 event, so I tried to do the same in Germany. Unfortunately, I was not allowed to take any images or video there. . . lame.

The shindig was held on one floor of a 2-floor club. It was packed, but compared to the entire revamped warehouse Disrupt took over for the party in San Fran, it was tiny.

I felt bad I wouldn’t be able to get you all any video footage, so when other Disrupt attendees offered to kidnap me and bring me to the West-siyeed of Berlin, I accepted. I got you all video from the dancing at that club instead. . . it was similar except. . . uh. . . there were more women.

Pro Clubbing Tip: I learned from these other Polish attendees (who happened to be e-marketing pros) how to find good spots to go out on the town. Their method is to look up influencers on Instagram in the area and check out their recent videos. This gives you a look at live action at different venues. Brilliant.

I watched some of the early rounds of Startup Battlefield and they left me really sad. Some of these companies had potentially great products, but their pitch game was poor. It was in general due to misunderstandings, yet surprisingly, none of it had to do with language misunderstandings. Many of these startups had difficulty understanding the basis of the questions they were being asked. Many also didn’t have a good feel for the perspective of their audiences. This made their responses weak.

Here are some interesting companies that didn’t take home the grand prize. Note: I’m not implying anything about the pitch game of these specific startups!

Spike – an app for diabetes management that sends real-time updates based on measured data. It also relies on friends and family of the patient to help keep blood sugar levels in-line. It turns out loved ones are a highly effective tool!

Imagio – bringing computer vision to crop analysis to make farming smarter. Having better and faster analysis of disease and yields in crops aids in making better farming decisions faster. That all equates to more food for the world, or so Imagio AI hopes. Imagio.AI was the runner-up in the Startup Battlefield Battlefield competition.

Loro – AI and machine vision assistant for wheelchair users. Loro combines a mounted camera and software to enable those in wheelchairs to see behind them, or zoom into a spot difficult to see from their position. It also offers other functionalities including face recognition and text-to-speech to help disabilities beyond being wheelchair-bound.

Then, I heard rumors of Legacy’s amazing first-round pitch. Afterward, I saw their pitch in the final round. It was smooth, real smooth.

Legacy is all about male fertility. They run clinical tests on sperm samples to give feedback to a man about his fertility. Legacy’s end game is to freeze men’s swimmers for safe-keeping.

Like Spike, Legacy’s method for reaching the end user is through that person’s loved ones. With Spike, it was on the side of day-to-day use. With Legacy, it’s hoped a man’s family (often the wife), would prod him into giving the topic more serious thought before he becomes a customer.

At the end of the final round Legacy pitch I watched, judges would ask questions to which founder Khaled Kteily would respond with a thorough, well-rehearsed answer. Then judges would silently purse their lips and nod with a look that said, “uhh . . . I got nothin’.”

It wasn’t super shocking when Legacy took home the grand $50,000 prize and all the glittery confetti.

Congratulations to Legacy and all the participants!

Behind the Design: Making a Farmhouse Table from Reclaimed Barn Wood

Are Your 3D Designs Being Stolen?