Not as many self-sufficient folks live off the grid like they used to, but the way of living is still as self-gratifying as it has ever been. How cool would it be to say you got your food from your backyard or your new leather shoes from last year’s cowhide?

Living on a farm still has its charms, as YouTube creator Jonny Builds reminds us through his do-it-yourself Parson’s table using reused wood from an old barn and inlaid epoxy. 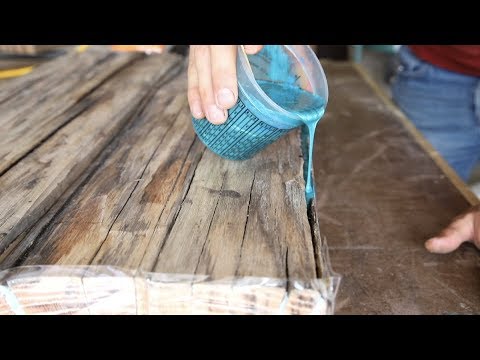 The hardest part about using old wood for woodworking is the inconsistency of the materials. Almost no piece of barn wood Jonny acquires is straight, and most of them feature cracks and twists.

Using a 15-foot beam, Jonny cuts two 32-inch long pieces of wood to form the table legs. Since the beam is so thick, he has to flip it over and cut it twice to make the parts.

Taking the two pieces to a bandsaw, he cuts out the thick wood to make the four table legs. Because the wood and bandsaw are both so ancient, the resulting cuts weren’t as straight as Jonny wanted them to be. This means he has to take the legs to a jointer to straighten out and make them easy to work with. Finally, he cuts them with a 14-inch rip blade to form their final width of 4¼ inches.

Using a mixture of red and white oak boards for the table body, Jonny finds he has roughly enough material to make a 7-foot long Parson’s table. After cutting the boards to size and running them through the jointer, he sets the longer boards in the middle and uses dominoes to align the warped wood pieces together. He then drills individual nubs into the wood planks for the dominoes before gluing the pieces together and hammering them in with a mallet.

Once done hammering, he sands down the middle portion to smooth it out before repeating the same process with the rest of the table pieces. Jonny then pulls all the pieces together using dominoes and clamps to prevent the wood from bending out of shape.

To finish the main table body, he props up the warped high spots of the table with glue and splints and levels the whole thing down using a router sled. This keeps the Parson’s table level without sacrificing the character the old barn wood brings. All he has to do now is add the shorter pieces of wood which connect the table legs.

Going back to the table legs, Jonny takes an 80-grit belt sander and smoothens these unsightly stumps down.

With all the pieces smoothed out and ready for fastening, he finally starts with the epoxy inlays. After applying aluminum tape to keep the spills in check, Jonny mixes and pours his blue-green epoxy resin on the cracks and crevices of the table. To help keep the table together, he combines some sawdust with epoxy and pours it between the wooden planks.

Even the legs aren’t safe from Jonny’s quest to plug every nook and crack with some adhesive liquid. He uses a mixture of Bondo filler and fiberglass resin on the legs before filling them in with the same blue-green epoxy mixture and drying it with a heat gun.

Once the epoxy has dried, he applies the heat gun to the spillover epoxy before chiseling it away. To give the table a clean finish, he sands the resin using 600-grit sandpaper before upping the grit to 1,200 and finally 2,000-grit paper.

The assembly is where Jonny had the most difficulty. After some problems with the aprons holding the legs to the table, he had to redo the entire apron structure using dominoes and glue to make it sturdy. While not as permanent as a couple of metal batons and bolts, the dominoes in both the legs and table keep the wood together without causing the entire structure to wobble.

To complete the Parson’s table, he cuts off the remaining excess wood before applying the finish to the entire thing. Unfortunately, upon connecting the tabletop to the body, the uneven clamping pressure and imperfect wood pieces caused large gaps between the individual pieces.

Unbeknownst to us, Jonny was working on a second table; using the first one as a prototype to learn from his mistakes. So while the end of the video was pretty anticlimactic, he did finish his project and got the table to the place he wanted.

You can find more of Jonny’s fascinating woodwork projects on his YouTube channel, Jonny Builds.

Highlights from the TechCrunch Disrupt Berlin 2018