This year’s TechCrunch Disrupt had a reported 7,500 attendees bustling through the Moscone Center in downtown San Francisco, September 5th-7th, 2018. There were a ton of interesting talks, the Startup Battlefield competition with a $100k prize, exhibitors small and large at the expo and, yes, we’ve got all the highlights for you. See the details in the full-length video or breakout section below — including footage from the sweet 90’s-themed after party. 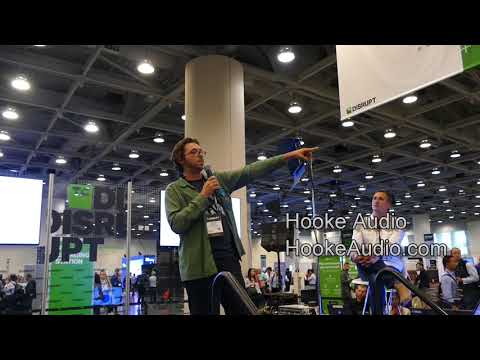 Quantum computing is now very much a thing! However, if you ask anyone in the industry, it’s still really crude. They don’t even really know for sure what it will be good for.

At Disrupt, there was a talk on the Main Stage by Chad Rigetti of Rigetti. IBM also had a (fake but genuine-looking replica) quantum computer on display – IBMQ.

Both these companies want YOU to start playing with building quantum code and testing it out with them. Even though the mechanical side is still pretty rough and yields noisy results, it’s good enough that we can start figuring out what the machine will be useful for. Everyone wants to know what the use case will be that shows “quantum advantage”. That basically means: what computation done with quantum computing would be way better than if it were done with a traditional computer? The guesses from the quantum geeks are those analyses where there is a large solution set.

All I kept thinking of were tolerance landscapes and solution sets for opto-mechanical designs… and the AI that will take my job.

Rigetti claimed that even if you don’t know how to code, their Python-based development platform is intuitive enough to be a great place to start. Plus, if you are the first to demonstrate quantum advantage on their newly launched Quantum Cloud Services, they’re offering a $1 million prize.

Eric Liedtke from Adidas and Joseph DeSimone from Carbon took the stage to talk about their project to team up and 3D print footwear domestically. The product is called “Futurecraft 4D“.

The advantages to individually 3D printing sneakers were no surprise. In addition to the ability to customize something normally produced in an identical manner and in the millions, there’s the added benefit of faster development time. There’s no steel tooling to wait 6-months or more for, and there’s no slow boat from China physically importing shoes. In a SolidSmack article earlier this year, we talked about how 3D printing tech could bring an almost a space-age teleportation ability to otherwise lengthy global development.

What I was really interested in hearing, and what was disappointingly glossed over, was talk of costs. There was mention of how expensive steel tooling is to create for mass manufacturing. Yes, OK. But is it more expensive than this particular 3D printing method? Traditionally, cutting an expensive tool has always been the cheapest way to make a bazillion of something, because tooling costs are divided by 1 bazillion. There was no cost comparison to the 3D printing tech being custom-developed to make these Furturecraft 4D shoes.

I guess once things ramp up, we’ll see what the overall price settles into. Based on this talk, I’m guessing customers will pay a premium for all that customization. And since the limited Futurecraft shoes available now are hard to get hold of, customers might not mind.

You can go HERE for the full video of this talk and TechCrunch article.

Voxon demoed their working 3D volumetric display, or in other words, their hologram machine! I’m told the idea for this device was the product of a late-night drinking session. Seems plausible.

Jump to the video of the show here to see this thing in action:

There is a mechanical component that oscillates rapidly, catching and dispersing the light throughout the volume of the image. Right now, there’s quite a bit of flicker going on, but it’s still seriously impressive. (I had to fight through a crowd of gawkers to get footage for the video in this article.) They have plans to sharpen the image and reduce the flicker in their ongoing R&D. Hopefully, they scored some big investors during this Australian company’s tour of the US. I’m told if that happens, it would accelerate their development plans much faster.

Skriware sells an educational package aimed at teaching kids about 3D printing, robotics, coding, and mechanical assembly. It comes with a 3D printer! Kids get to truly build and program a robot from scratch and then see how all the engineering disciplines work together in the final product.

Because the cost of a 3D printer is involved, the package is marketed to teachers where it can be split among the budget of several students. However, if you’re a parent in the market for a 3D printer for yourself, it might make sense to get one that’s ready to make cool toys for your kids.

Legit could be a great resource if you’re in the research phase of R&D. They make a kind of search engine specifically tailored to medical and engineering research. Their AI scours patents and white papers and allows you to search multiple keywords at once while weighting them differently. Plus, if there’s a specific focus area you’re researching over a period of time, the engine gets smarter about what the most relevant content is. If you’re working in an organization, you can also see other searches your colleagues conducted. Legit definitely looked a lot handier than a straight Google search.

Right now, they’re selling to larger companies and institutions that can offset the large price tag, however, they have sold individual licenses. Part of that price tag is the customization by industry and method of use within each organization. Legit’s CEO, Matt Osman, told me they’re open to investigating ways to make this tech available to all us in the masses and when pressed, said he hopes to find more networks to work with, in the future.

Do me a favor and press him some more! I want to use this thing.

Did you know that you can pick up software developed by NASA for FREE? You can also license a lot of their IP in the physical engineering world, too! If you’re a startup, they have a program for licensing that lets you wave fees for the first 3 years with some conditions.

Learn more on their startup program HERE. For the catalog full of free software, go HERE. And for the patent portfolio for physical stuff, go HERE.

It might be fun to peruse their catalogs, even if just for brainstorming fodder.

It was refreshing to see something so practical among the wilder topics at this event. ProGlove makes a glove with a tiny, built-in code reader to help make warehousing and shipping more efficient.

I imagine using this thing for 8+ hours a day takes a smaller toll on workers’ hands compared with a heavier, clunky hand-held scanner. These guys are based in Munich with an office in Chicago — another uncommon but practical combination.

In addition to the Startup Battlefield competitions happening on the Main Stage, there were some lower stakes pitches happening on the Expo Hall floor. Each day, 25 startups were selected by TechCrunch judges to deliver a 60-second pitch to the Expo Hall. There were no prizes up for grabs, and the pitches weren’t even to be recorded — it was just for a little extra exposure.

I stopped by on the Thursday of the show, and that day, only 2 of the presenters owned companies involved deeply in the physical product development world we care most about. At least one of them may already be familiar to SolidSmack audiences . . .

We recently interviewed Anthony Mattana of Hooke Audio to learn all about his wild startup story and the product development tribulations he encountered. At Disrupt, he pitched the Hooke Verse headphones. These contain wireless mics that sit inside your ear allowing you to record “3D audio”. Check out the interview to demo what a recording with a pair of these feels/sounds like. It’s really weird . . . and awesome!

Max Gerbut spoke about his company, PassivDom, which will ship you a fully self-contained, solar-powered, 3D-printed house. Max told me the ability to print large structural segments of homes as continual pieces boosts both stability and thermal management capability. These tiny houses even come furnished and they’ll have them assembled for you wherever you want. Another factoid that’s maybe not so surprising: most of their sales come from California.

The runner-up in this year’s Startup Battlefield competition was Unbound. They make “fashion forward vibrators” with a female target market. Witnessing their pitch was wildly amusing for me, a female sitting in a mostly male audience. The discomfort level was palpable.

Unbound’s effect on the audience was surpassed only by another competitor – Kegg. Their product analyzes vaginal mucus to track fertility cycles and one of the images they used looked like a bucket of raw egg whites dripping through a woman’s fingers. It was as if 90% of the viewers collectively stopped breathing altogether. I polled some audience members afterward and verified that this was, in fact, the case.

But I guess that gives a clue as to why these markets have remained relatively untapped for so many years. Many of the people with the money and power to build these devices would rather, I don’t know, 3D-print sneakers.

Forethought.ai — with their SW solution to make answering help tickets faster — took home the $100k prize. Their product, Agatha Answers, can search through past tickets and knowledge bases to find answers even when the questions are complicated. When the human help desk agent selects the best solution from what Forethought’s software presents, an automatic response to the client can be generated, speeding things up even more.

To see the Startup Battlefield runner-ups getting hugs and the winner getting confetti and a fat check, watch the video from here:

Model of the Week: Xbox One Mini-Steering Wheel [Smoke Them Tires!]

Here Are the Top Features for SOLIDWORKS 2019